Your lungs are a pair of spongy, pyramid-shaped organs in your chest that bring fresh oxygen into your body when you inhale. The lungs also send out carbon dioxide, a waste product of cellular function, when you exhale. The lungs, along with a network of air passages, are part of your body’s respiratory system. 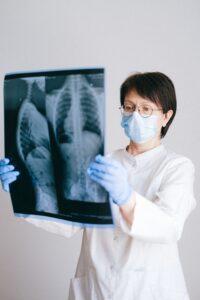 Lung cancer is a type of cancer that starts in the lungs. Cancer is a disease that occurs when cells grow and divide uncontrollably and destroy body tissue. Lung cancers can begin in any part of the lungs, but 90 to 95 percent of cancers of the lung arise from the epithelial cells. Those are the cells that line the larger and smaller air passages, called bronchi and bronchioles.

Lung cancer is the number one cause of cancer deaths in both men and women in the United States and worldwide. It’s estimated that in 2020, 228,820 adults in the US will be diagnosed with lung cancer, and 135,720 Americans are expected to die from it. But there is some good news. Death rates have declined by 51 percent since 1990 in men and 26 percent in women since 2002.

Research suggests that these declines are the result of more people not smoking and more people quitting smoking, as well as to advances in lung cancer diagnosis and treatment.

SCLC, which accounts for 10 percent to 15 percent of all lung cancer cases, is the most aggressive lung cancer. It spreads rapidly to other areas of the body and is most often discovered after it has spread extensively. In fact, about 70 percent of people with SCLC will have disease that has already spread at the time they are diagnosed.

Other cancers can occur in the lungs as well. Bronchial carcinoids, which account for up to 5 percent of lung cancers, are typically small when diagnosed and most often occur in people under 40 years old. Other types of lung cancer, including adenoid cystic carcinomas, lymphomas and sarcomas, as well as benign lung tumors such as hamartomas, are rare.

Another lung cancer risk factor is exposure to radon, a naturally occurring gas that results from the breakdown of uranium in soil and rocks that can accumulate in your home. Other risk factors include exposure to asbestos, diesel exhaust and other cancer-causing agents in the workplace; air pollution; previous radiation therapy and a personal or family history of lung cancer.

In many cases, there are no symptoms in the early stages of lung cancer. It is often discovered on a routine imaging exam for another condition. But in some cases, symptoms are present. If you notice any signs and symptoms of lung cancer, visit your doctor right away. Your doctor may be able to diagnose lung cancer at an early stage, when treatment is more likely to be effective.

Signs and symptoms of lung cancer include: a cough that doesn’t go away or gets worse; coughing up blood or rust-colored sputum; chest pain that’s worse with deep breathing, coughing or laughing, shortness of breath; hoarseness; loss of appetite, unexplained weight loss; fatigue; a respiratory infection that won’t go away; and new onset of wheezing.

Diagnosing lung cancer begins with a thorough medical history and physical exam followed by a combination of diagnostic tests and procedures. Tests used may include x-ray, CT, MRI; PET, bone scan, blood tests and sputum cytology. Your doctor may also perform a bronchoscopy, thoracentesis and/or needle biopsy to obtain tissue samples for examination under a microscope to look for cancer cells.

The treatment you receive will depend on several factors, including the type of lung cancer you have, how far it has spread, called the stage, and your overall health. You may get more than one type of treatment.

There’s no sure way to prevent lung cancer, but there are steps you can take to reduce your risk for developing it. Don’t smoke, but if you do, quit, and avoid secondhand smoke; test your home for radon and make any necessary upgrades; avoid asbestos, diesel exhaust and other cancer-causing agents at work; and maintain a healthy lifestyle. Eat a diet rich in fruits and vegetables and exercise regularly.