November is Bladder Health Awareness Month. Your bladder is a hollow, muscular sac located in your lower abdomen. It temporarily stores the urine made by your kidneys until it is released into a tube called the urethra, which transports the urine out of your body. When empty, the bladder is about the size and shape of a pear. 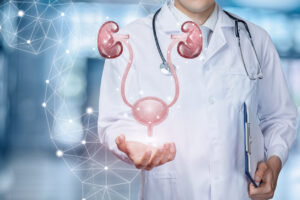 There are a number of conditions than can affect your bladder. Among the most common are urinary incontinence, overactive bladder (OAB), cystitis and bladder cancer. We’re going to take a brief look at these four disorders in this blog.

With stress incontinence, activities such as coughing, sneezing, heavy lifting, straining when using the bathroom and even laughing put pressure on the bladder and causes it to leak. Urge incontinence occurs when you feel the need to use the bathroom right away, but some urine leaks out before you can get there.

Overflow incontinence occurs when you don’t empty your bladder completely initially, so it overflows with new urine and leaks. Some people have more than one type of incontinence. They may leak urine when coughing or sneezing and leak when they have a strong urge to use the bathroom. In these cases, the condition is called mixed incontinence.

Overactive bladder, or OAB, is a combination of symptoms that may include the need to urinate more frequently, increased urgency and incontinence. You may also feel the need to urinate often at night. An estimated 33 million adults in the US suffer with OAB. About 17 percent of women over 18 years of age have OAB.

Weak pelvic muscles are a common cause of OAB, but it can also be caused by damage to the nerves that send signals from the brain to the bladder telling it to empty at the wrong time. Certain medications, infection, excess weight and an estrogen deficiency, such as what occurs after menopause, are other potential causes.

You can lessen your OAB symptoms by decreasing or eliminating foods and beverages known to worsen symptoms such as tea, coffee, alcohol, chocolate and caffeinated soft drinks. In addition, maintaining bowel regularity, maintaining a healthy weight and stopping smoking can help. There are also techniques for retraining your bladder so it holds and releases urine more efficiently.

Cystitis is inflammation of the bladder, most often due to a bacterial infection. It is considered a type of urinary tract infection, or UTI. UTIs are one of the most common reasons patients visit their physicians. Estimates based on physician office and emergency department statistics suggest there are about 7 million episodes of acute cystitis each year.

Common symptoms of cystitis include a strong, persistent urge to urinate, a burning sensation when urinating, urinating frequently but only small amounts, blood in the urine, cloudy or strong-smelling urine, pelvic discomfort, a feeling of pressure in the lower abdomen and a low-grade fever. See your doctor immediately if you experience back or side pain, fever and chills, or nausea and vomiting.

Bacterial cystitis is the most common type of cystitis, but there are other types as well. These include interstitial cystitis, drug-induced cystitis, radiation cystitis, foreign-body cystitis, chemical cystitis and cystitis caused by other conditions such as diabetes, kidney stones, an enlarged prostate or spinal cord injury.

Treatment for bladder cancer depends on its stage, which is the extent to which the cancer has grown and spread. Five types of standard treatment are traditionally used for bladder cancer: surgery, radiation therapy, chemotherapy, immunotherapy and targeted therapy. In addition, new therapies are currently being evaluated in clinical trials.

You may not be able to prevent bladder cancer, but there are steps you can take to reduce your risk and improve the overall health of your bladder. Some things you can do to keep your bladder healthy include: drinking an appropriate amount of water, avoiding constipation, maintaining a healthy weight, exercising regularly, eating a healthy diet and quitting smoking.