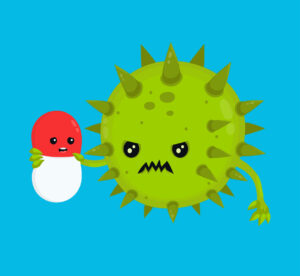 A report issued in November by the Centers for Disease Control and Prevention (CDC) revealed some bad news and some good news about infections caused by antibiotic-resistant microbes, or superbugs, in America. Superbugs are germs such a bacteria and fungi that can’t be destroyed by the medications currently available to fight them.

First, the bad news: In the report, the CDC noted that antibiotic-resistant superbugs have killed nearly twice as many people as previously believed. Also, the CDC announced it has identified two new, potentially deadly superbugs, bringing the total of most threatening superbugs to five.

One of the new superbugs,, a fungus called Candida auris, was a bit of a surprise to CDC officials. Five years ago, they weren’t even considering Candida auris as a serious threat. But it is now.

Among the superbugs we’ve known about, C difficle is a particularly nasty one. It is considered an urgent threat by health officials. C difficle alone caused nearly 250,000 infections in 2017, the most recent year for available data. It also caused at least 12,000 deaths that year.

The good news is that the total number of deaths from superbug infections has declined by 18 percent. The CDC estimates that 36,000 Americans died as a result of superbug infections in 2017. Compare that to 44,000 deaths in 2013. The decline is attributed, at least in part, to more judicious prescribing of antibiotics by physicians.

Antibiotic resistance is considered one of the world’s most pressing health problems. It happens when the germs find a way to survive the onslaught of death caused by the drugs. Bacteria are sneaky. They can alter antibiotics’ effect on them in several ways. I’ll describe a few of those ways soon.

Just to be clear, it’s the bacteria that become resistant to the medications. Individuals don’t become resistant. But resistant germs can be spread from person to person, and before you know it, an entire community is at risk.

So how do germs become resistant to antibiotics? The short answer is: They fight back!. They develop defense strategies called resistance mechanisms. Bacteria develop these mechanisms by altering the coded instructions found in their DNA. They can then share altered pieces of their DNA with other germs, making them resistant as well.

One of the resistance mechanisms bacteria use is to restrict the access of the antibiotics. Bacteria do this by changing or limiting the entryways for the antibiotics into their cells. That way, the drugs can’t get inside the bacteria to destroy them.

A second defense strategy of bacteria is to rid themselves of the antibiotic. They use pumps located in their cell walls to pump out any antibiotic that gets into the cells. A third strategy is to change or destroy the antibiotic using enzymes and proteins that break down the medication, rendering it useless.

Many antibiotics are designed to single out and destroy specific parts of a bacterium. These are the medications’ targets. One resistance mechanism is to bypass the effects of the antibiotics by developing new cell processes that avoid using the antibiotics’ targets.

Bacteria also develop resistance by changing the antibiotics’ targets. As a result, the antibiotics no longer fit and the drugs can’t do their job of destroying the bacteria.

The CDC and the World Health Organization continue to call on physicians to prescribe antibiotics only when they’re absolutely necessary and appropriate to treat patients’ infections. They ask us to take action as well to use antibiotics wisely. Here are a few suggestions for things you can do: