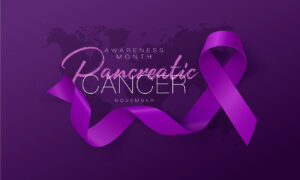 Game show host Alex Trebek, who has battled pancreatic cancer since March, has teamed up with the World Pancreatic Cancer Coalition to star in a public service announcement aimed at raising awareness and donations for research.

“In nearly every country, pancreatic cancer is the only major cancer with a five-year survival rate in the single digits,” Trebek said in the clip, filmed on the set of Jeopardy!, which he has hosted for 36 seasons. “Now, in order to help patients fight and survive this disease, more attention and awareness are needed. And that’s why I’ve joined forces with the World Pancreatic Cancer Coalition, to help raise global awareness of the risk and symptoms of pancreatic cancer.”

The PSA came out on Nov. 1, which marked the start of Pancreatic Cancer Awareness Month. Pancreatic cancer accounts for 3 percent of all the cancers in the United States and 7 percent of all cancer deaths. The American Cancer Society projects that about 56,770 people (29,940 men and 26,830 women) will be diagnosed with pancreatic cancer by the end of this year. About 45,750 people (23,800 men and 21,950 women) are expected to die from the disease this year.

The exact cause of pancreatic cancer is not well understood, though risk factors include age and family history. The disease is slightly more prevalent in men than in women. African-Americans and Ashkenazi Jews also report more pancreatic cancer cases. Lifestyle choices such as a diet high in red and processed meat consumption, heavy drinking or smoking also may play a role. Diets rich in fruits and vegetables may lower risk.

U.S. Supreme Court Justice Ruth Bader Ginsburg was diagnosed with pancreatic cancer in 2009. Soon after, surgeons removed her pancreas and spleen. Actors John Hurt, Alan Rickman, Patrick Swayze and Michael Landon all died from pancreatic cancer. Other notables who lost their lives include Sally Ride, the first female astronaut in space, legendary Oakland Raider Gene Upshaw, Benjamin Orr, co-founder of the 1980s band, The Cars, and Charlotte Rae, the wise boarding school house mom in the hit TV show “The Facts of Life.” Apple founder Steve Jobs and Queen of Soul Aretha Franklin each died after being diagnosed with pancreatic tumors, though not cancer.

No screenings for pancreatic cancer exist, which is why it’s important to get checked out if you have any of the symptoms. Often, the disease is diagnosed in its late stages, which makes treatment more challenging. Trebek’s cancer had already reached stage four when doctors diagnosed him.

“I wish I had known sooner that the persistent stomach pain I experienced prior to my diagnosis was a symptom of pancreatic cancer,” Trebek said during the clip.

Other common symptoms can include mid-back pain, unexplained weight loss, new onset diabetes, stool changes and the yellowing of the skin or eyes.

To help determine if you have pancreatic cancer, your doctor will ask you about your family history, perform an exam that includes looking at your body, skin and eyes and pressing on your abdomen to check for changes around the pancreas, liver and gallbladder, and possibly order blood, urine and stool tests. Your doctor also will order an imaging study such as computed tomography (CT) scan or magnetic resonance imaging (MRI) and get a tissue sample called a biopsy.

Treatments include surgery, chemotherapy, radiation or a combination of these. You may also have opportunities to participate in clinical trials.

For more information about pancreatic cancer and to see Trebek’s PSA, visit the Pancreatic Action Network.

2 thoughts on “Amid his own battle with the disease, Jeopardy! host Alex Trebek participates in pancreatic cancer PSA.”