It’s probably pretty common for people to equate the term arthritis with osteoarthritis, the wear-and-tear form of arthritis that’s common in adults as we get older. But that’s just one type of arthritis. There are many more, including types that specifically affect children. In general terms, that group of disorders is referred to as childhood arthritis or juvenile arthritis. 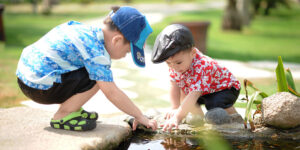 The most common type of juvenile arthritis is juvenile idiopathic arthritis or JIA. JIA affects approximately one in 1,000 children under age 16 in the United State or about 300,000 children. JIA is an autoimmune disorder, where the body’s own immune system attacks the joints’ cells and tissues, specifically the synovium, the tissue lining the inside of the joints.

In response to the immune system attack, the synovium makes more fluid than needed inside the joints, and that excess fluid leads to swelling, pain and stiffness. This inflammation can eventually damage cartilage and bone, causing joint dysfunction. Without appropriate treatment, JIA can affect a child’s overall growth and development. JIA can also affect a child’s eyes.

There are several subtypes that fall under the JIA heading. They all involve chronic or long-lasting joint inflammation. To be considered chronic, the inflammation must have been affecting  the joints for more than six weeks. The three main subtypes are characterized by their symptoms and number of joints involved. 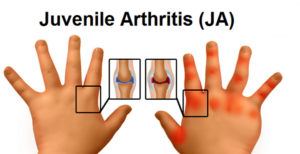 Systemic JIA. This type affects about ten percent of children with JIA. It generally begins with a high fever that can be accompanied by a rash. This type may cause inflammation of internal organs such as the heart, liver, spleen and lymph nodes as well as the joints. It affects boys and girls equally and rarely affects the eyes.

Oligoarticular JIA. This types involves fewer than five joints in its first stages, most often the knee, ankle and wrist joints. It affects about 50 percent of children with arthritis, and it’s more common in girls than in boys. It may spread to involve more joints, and it can also cause inflammation of the eyes. Many children outgrow this type by adulthood.

Polyarticulat JIA. About 30 percent of children with JIA have this type. It affects five or more joints, often the same joints on both sides of the body. This type can affect the neck and jaw joints, as well as the small joints of the hands and feet. It can begin at any age and is more common in girls than in boys.

Symptoms vary depending on the type of JIA the child has, but there are some common symptoms, including:

The exact cause of JIA is unknown. Researchers believe that some children possess certain genes that make them more susceptible to developing the disease, then exposure to something in the environment, such as a virus, triggers the disease to begin. It’s not hereditary, however. It’s rare for more than one child in a family to develop JIA.

Early diagnosis and treatment are key to controlling inflammation, preventing joint damage and keeping the child as healthy and functional as possible. There is no one test for JIA. Doctors diagnose the condition using a variety of methods. They generally begin their assessments by taking a thorough medical history of the patient and performing a full physical examination.

Doctors may also order certain tests. These may include laboratory tests on blood, joint and tissue fluids to rule out other conditions as the cause of the symptoms. X-rays may be taken as well to look for any injuries or unusual development of the bones of the joints. 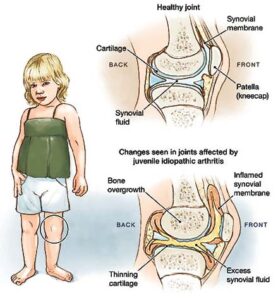 The goal of treatment for JIA is to reduce swelling, relieve pain, prevent damage and maintain function of the joints. There is typically a team of health care professionals involved in the child’s treatment, including physical and occupational therapists, dietitians, social workers and even school nurses working in concert with the child’s doctor.

Because JIA is an autoimmune disorder, medication is often used in its treatment. If only a few joints are involved, doctors may begin by injecting steroids directly into the affected joints to reduce inflammation and relieve pain. Another option is adding a group of medications called disease modifying drugs or DMARDS.

DMARDS may be used when many joints are involved or when the JIA doesn’t respond to the steroids. DMARDS include drugs such as methotrexate and the more recently developed biologics such as Enbrel, Remicade and Humira. These medications cause side effects and children taking them must be monitored closely.

Physical and occupational therapy also play a role in the treatment of JIA. Physical therapy exercises are important because they help in recovering and preserving range of motion and function of the joints. They also maintain muscle tone, and strong muscles aid smooth joint movement. Occupational therapy shows the child how to perform daily activities with limited joint function.

It’s clear that arthritis is not just for seniors. Many children struggle with painful, swollen and inflamed joints as well. If you know a child struggling with arthritis, be understanding and supportive. Help them if they ask for it, but for the most part, allow them to perform activities on their own. With treatment, children with arthritis can live normal, healthy lives.