By now, you know about the drug crisis facing this nation associated with opioid painkillers. You know opioids are overused, and they can lead to abuse, addiction and even death. Maybe you’ve decided to treat your pain, whether it’s a tension headache or back pain, with over-the-counter pain medicines instead. After all, they’re safer, right? 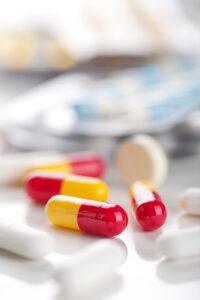 Well, not entirely. While OTC pain medicines don’t generally lead to addiction and death, they do have serious risks if you take too much or take them for too long. And that’s actually become a problem. A study by a Boston University School of Health researcher found that Americans are also abusing OTC pain medications, often exceeding the recommended daily dosage.

A problem noted by the Boston University researcher is that OTC pain medications are taken without a physician’s supervision. Drug makers provide directions on product labels, but, in reality, patients choose their dosage. And most have little knowledge of dosing limits and the dangers of exceeding those limits.

When taken as directed, most OTC medications are safe. However, this is not the case for every person, especially when they combine a medicine with other OTC drugs or prescription medications. OTC pain medicines, like any medication, also have risks and side effects.

Acetaminophen, which is found in drugs like Tylenol, Excedrin and Midol, is a common OTC medicine used to treat pain and discomfort. However, acetaminophen can damage liver cells and is, in fact, responsible for 50 percent of acute liver failure cases in the US. It’s also the leading reason for calls to poison control centers and is responsible for 50,000 ER visits each year.

The sneaky thing about acetaminophen is that it’s found in a variety of products, including those for allergies, colds, flu, coughs and insomnia, so you can easily take more than intended. If you’re taking more than one medicine, be sure to check the labels. Don’t take more than 3,000 mg of acetaminophen in one 24-hour period. That’s the maximum recommended by the FDA.

There are other OTC pain relievers called nonsteroidal anti-inflammatory drugs, or NSAIDs, that aren’t so hard on the liver. NSAIDs relieve pain by decreasing inflammation in the target area. They do this by inhibiting two enzymes, COX-1 and COX-2, which produce prostaglandins. Those are hormones that create inflammation, which is responsible for many types of pain.

The problems is prostaglandins also do some good. They protect the lining of the stomach and intestines. When there’s fewer prostaglandins, there’s less protection for the stomach lining, and you can develop stomach problems, including ulcers. NSAIDs also make it harder for your blood to clot, which can make ulcers worse.

OTC NSAIDs include Advil and Motrin. These products contain ibuprofen, which is found in many cold and flu remedies, so you have to pay attention to what you’re taking. The maximum daily dose of these medications is 1200 mg, although it’s strongly recommended this not be taken daily. Naproxen, such as Aleve, is another NSAID that can be bought over the counter.

All of these NSAIDS can cause problems when taken in excess or over long periods of time. These side effects include high blood pressure, damage to the kidneys, ringing in the ears, and an increased risk for heart attack and stroke.

The risk for heart problems is further delineated in a 2016 study published in the British Medical Journal that found the use of NSAIDs was associated with a 20 percent higher risk of being hospitalized with heart failure. Ibuprofen and naproxen were among the NSAIDs called out in that study.

For many of us, OTC pain relievers are a godsend. But we shouldn’t take them lightly just because we can buy them in a store without a doctor’s prescription. They’re still medications and should be taken with caution. Always follow the directions on the package label and your doctor’s recommendations.

In general, don’t take OTC pain medicines for longer than 10 days. If you’re pain persists, see your doctor. He or she can discuss alternatives for managing your pain. These might include courses of heat and ice, physical therapy, steroid injections, radiofrequency ablation, which involves heating up the nerves and destroying their ability to send pain signals to the brain, or even medical marijuana.

You don’t have to be in pain, just take pain medication wisely. It’s smart for your overall health.