The annual number of reported cases of hepatitis A in the state of Florida is on the rise yet again and at an alarming rate, according to figures released by the Florida Department of Health.

Hepatitis A is a vaccine-preventable, communicable disease of the liver that is caused by the hepatitis A virus, or HAV. It is typically transmitted from one person to the next through the fecal-oral route or through the consumption of contaminated food or water.

Symptoms of hepatitis A include fatigue, low appetite, stomach pain, nausea and jaundice but usually resolve within two months due to antibodies that are produced in response to the virus and protect against reinfection for life.

A vaccination is the best way to prevent the disease and such vaccinations are recommended by The Advisory Committee on Immunization Practices (ACIP) for all children a year old or older.

Vaccinations are also recommended for anyone who is homeless or living in an unstable housing situation or anyone who is at an increased risk of infection, including people using injection and non-injection drugs, people with chronic liver disease or blood clotting disorders.

The outbreak of the virus in the state of Florida began in 2017, when the number of reported cases of hepatitis A jumped from 122 a year earlier to 276. That number nearly doubled in 2018 to 548 cases. 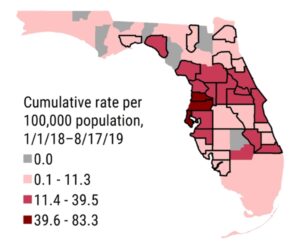 With that number already exceeded, the surgeon general of the state of Florida, Scott Rivkees, declared a public emergency on Aug. 1, 2019, saying the declaration was a “proactive step to appropriately alert the public to this serious illness.”

Rivkees encouraged people to be vaccinated against the virus, which had spread the most through Pasco (374 cases), Pinellas (344) and Volusia (208) counties at the time the report was released.

Orange County, Hillsborough County, Marion County, Manatee County and Hernando County had all reported more than 100 hepatitis A cases at the time of the report, with Lake County falling just shy of that number with 98 reported cases.