Three dimensional, or 3D, printing has had many notable software and technology advances in recent years, and one of the more notable implementations in that progression was recently engineered by a St. Petersburg surgeon. 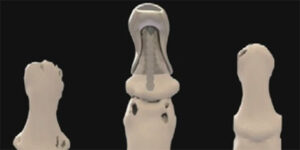 Dr. Daniel Penello, a surgeon with Alexander Orthopedic Associates, became the first doctor to use a 3D printer to replace a finger bone after a welder named Robert Smith lost virtually all use of his middle finger when a steel beam fell on it and crushed it at work.

While Smith was making the difficult decision of what, precisely, to do with his crushed finger (i.e., leave it uncared for or have it amputated), Dr. Penello contacted Additive Orthopaedics, a 3D printing company that develops advanced orthopedic devices, to see if employees there could create the software and technology necessary to perform the first-of-its-kind procedure.

Additive Orthopaedics responded by obtaining a CT scan of Smith’s opposite uninjured middle finger from Dr. Penello. From that it manufactured a replacement part made of a surgical grade metal that contains a rough inner surface that allows it to attach firmly to the existing bone.

While Additive Orthopaedics worked its magic, Dr. Penello began the long process (five months) of gathering and mastering the precise information he needed to successfully perform the procedure.

Dr. Penello explained to a Patch.com writer that “my primary concern was our ability to develop an implant that would fit anatomically, while being strong enough to withstand the tremendous forces that it would be exposed to during any pinching, gripping, or lifting activities.”

The surgery was performed this past spring, and Dr. Penello deemed it a success as Smith is now doing physical therapy to regain complete usage of both the rejuvenated finger and his hand.

The successful surgery and the ongoing work at Additive Orthopaedics suggests 3D printing may soon impact the medical field in a far greater way, particularly in the area of custom implants, which could become more affordable through this process.

“I picture a 3D printer, sitting at the hospital, and when someone comes into the hospital with a broken wrist, someone will go to the printer and type it in,” Dr. Penello told the Tampa Bay Business Journal. “Almost like ‘Star Trek,’ where they type in what they need.” 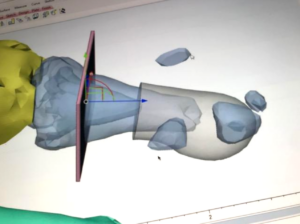 That Dr. Penello performed the inaugural 3D printed finger bone operation – at least the first known in the United States – should not come as a surprise to anyone. In an interview in February for “Becker’s Spine Review,” he told a writer:

“I am most excited about the emerging trend of additive manufacturing (commonly known as 3D printing) in the development of patient-matched devices and superior implants. … The additive manufacturing process has the ability to develop custom implants and patient-specific jigs and targeting devices in a much more cost-effective and scalable way.”

Dr. Penello, who is board certified in both Canada and the United States, graduated from the medical school of the University of Toronto in Canada, and later worked at the Cleveland Clinic, is well known in his profession.

He has a YouTube video telling viewers of his professional experiences that includes an explanation of how his life vocation was influenced by his father “who sustained a pretty tragic injury in the right hand (that) really altered the course of his life. It led me to the career of my dreams because I love hand surgery.”