Do you get heartburn after you eat? Maybe you get it once in a while, or maybe you’re one of the 15 million or more Americans who get it every day. That’s about 20 percent of the US population. If you get heartburn often, you may have a condition called acid reflux. If your heartburn is seriously bothering you, you may have gastroesophageal reflux disease, or GERD. 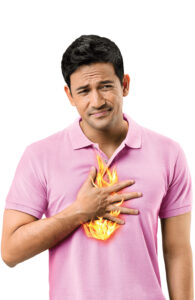 GERD occurs when acid from your stomach persistently flows, or refluxes, back up into your esophagus, your food tube. What happens is that certain factors, including being overweight, smoking and taking certain medications, weakens the round muscle separating your stomach and esophagus that normally keeps the acid in its place.

GERD doesn’t typically kill you, but it can cause an alteration in the tissue of your esophagus that can turn into esophageal cancer, which is rare but deadly. The alteration occurs when GERD keeps getting worse and the cells lining your esophagus change so that they’re more like cells of the intestines. This is called Barrett’s esophagus.

Barrett’s esophagus can be a precursor to esophageal cancer, the fastest growing cancer in the United States. It starts with a precancerous condition called esophageal dysplasia. Dysplastic cells are those that begin to change and can over time deteriorate further into cancer cells. 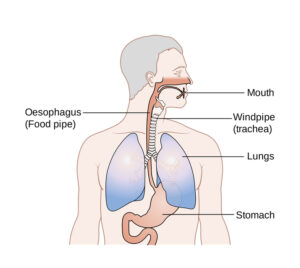 Fortunately, esophageal cancer can be effectively treated if caught in its early stages. The way to do that is by visualizing your Barrett’s esophagus using an endoscope and taking samples of the tissue to look for cancer cells.

Detecting cancer cells in Barrett’s esophagus can be tricky, however, because the cells are often flat and spotty in the way they are distributed in the tissue. Getting as many cells as possible in a sample increases the likelihood your doctor will find any cancerous ones.

In the past, samples for biopsy were taken using forceps and pinching off bits of tissue at certain intervals. This method’s chief drawback is that it only gets samples from a small percentage of the total area of the esophagus. Recently, a new system for obtaining cells for biopsy was introduced that can sample up to 70 percent of the affected Barrett’s tissue.

The new technology is called wide-area transepithelial sampling (WATS), and it works with computer-assisted 3-D analysis. That makes it WATS3D. WATS3D uses a special, minimally invasive brush that doctors scrape around the esophageal wall in an up and down motion,. This gathers samples from a wide area and from the tissue layers where dangerous, precancer cells develop.

The samples taken by WATS3D are then analyzed by the computer system. The maker of WATS3D borrowed technology from the US Strategic Defense Initiative, also known as the Star Wars program, and a unique algorithm the WATS3D computer uses to analyze the samples.

The computer has a special neural network, or “brain,” that can see virtually the entire sample. The computer scans the sample three dimensionally and takes the 200 most suspicious areas and projects them on a monitor for the pathologist to read. The images provide crucial information about the cells’ structure that helps doctors accurately detect cancer.

It doesn’t take much time, either. WTAS3D is performed during a standard endoscopy. It adds about five minutes, if that, to the time it takes to do the endoscopy. That sounds pretty reasonable to me to increase your chances of catching esophageal cancer in its earliest stages.