Both Crohn’s disease and ulcerative colitis (UC) are types of inflammatory bowel disease (IBD). Crohn’s and UC have many things in common: they both cause inflammation, swelling and sores in the lining of the digestive tract, and they’ve got many symptoms in common. Yet, they’re distinct disorders that affect different areas of the GI tract. 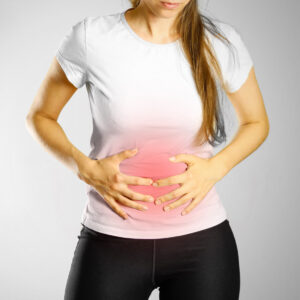 It’s estimated that 1.6 million Americans suffer with IBD. It occurs in men and women equally, but is more common in Caucasians than in other ethnic groups. Crohn’s and UC can occur at any age, but are most often diagnosed before age 30, especially Crohn’s, which is most common between the ages of 15 and 30. 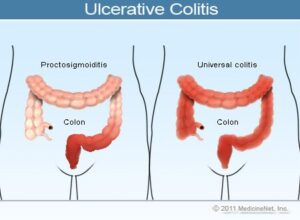 There’s another difference between Crohn’s and UC. In Crohn’s, the inflammation can “skip” portions of the intestine. It can affect two separate sections and leave areas of normal tissue in between diseased portions. UC doesn’t do that. It affects a continuous portion of the large intestine.

Both types of IBD have similar symptoms, which can be aggravated by outside factors such as diet and stress. Those factors can trigger flare-ups of Crohn’s and UC. Symptoms of these disorders include:

Doctors don’t know the exact cause of Crohn’s disease and UC, but they run in families so researchers suspect genetics are a factor. Both Crohn’s and UC are disorders of the immune system, which is the body’s natural defense system. The immune system releases defensive substances in response to foreign or invading cells it detects in the body. 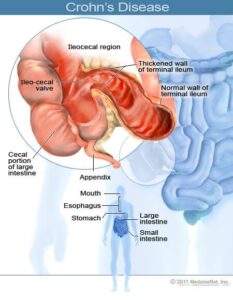 It’s believed that in Crohn’s and UC, something triggers the immune system to mistakenly recognize cells of the lining of the GI tract as “foreign” and attack them, causing inflammation. Inflammation comes from the Greek work for “flame”. It literally means, “to be set on fire.” That explains most of the IBD symptoms.

Because the symptoms of Crohn’s and UCs are similar, your doctor will need to use tests to diagnose which disorder you have. Proper diagnosis is critical because treatment is based on the type of IBD you have.

While Crohn’s and UC both have abdominal pain as a symptom, the pain of UC is typically found in the lower left side of the abdomen. Knowing this may help your doctor determine which set of tests to order for you, because tests differ for the diagnosis of Crohn’s and UC.

If your doctor suspects Crohn’s, he or she may order certain endoscopy tests to get a better look at your digestive tract. Endoscopy is a minor procedure during which a small instrument with a camera and light on its end is threaded through your GI tract to look for abnormalities.

For UC, doctors often use a test with an instrument inserted into the rectum that examines the rectum and lower colon. This type of endoscopy is a sigmoidoscopy. Your doctor may also suggest you get a total colonoscopy, which examines the entire colon.

If you’re diagnosed with Crohn’s or UC, your doctor may prescribe certain medications. He or she may start you on a course of corticosteroids or other anti-inflammatory medicines. A medication to suppress your immune system may also be prescribed. Later, your doctor may add a biologic, such as STELARA® or ENTYVIO®, as a combination therapy.

You may be asked to keep a diary to try to uncover foods or situations, such as those that are especially stressful, that trigger flare-ups of these disorders. Once you identify your triggers, you can work to decrease or eliminate them with diet and lifestyle changes.

Medical treatments are the mainstay for Crohn’s and UC, but in severe cases, surgery may be necessary. Surgery is generally used in cases where there are complications from the disorders. These complications may include bowel perforation, excessive bleeding, development of a cancerous growth or severe, uncontrollable inflammation.

For Crohn’s, surgery may involve removing diseased sections of the digestive tract. In severe cases of UC, the surgical removal of the entire large intestine and rectum may be required.

Whatever you do, don’t self-diagnose. If you’re suffering any of the symptoms of IBD, see your doctor and let him or her diagnose Crohn’s or UC the right way!