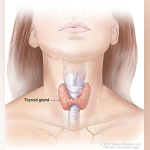 Hypothyroidism is a common condition. Estimates vary because millions of people have the disorder and don’t know it, but approximately 10 million Americans have the condition.

Look at it another way. About 4.6 percent of the population of the US ages 12 and older has hypothyroidism. Fortunately, most of those cases are mild. Still, that’s nearly five people out of every 100 people. Women are more likely than men to develop the disorder, and it’s more likely to occur in people age 60 and older.

Let’s learn a little more about hypothyroidism. We’ll start with the basics. The thyroid is an endocrine gland, which means it secretes its hormone directly into the blood instead of through a duct. The thyroid looks a little bit like a butterfly, and it sits in the lower front part of the neck. It produces and secretes thyroid hormones.

The thyroid controls metabolism, the process by which your body uses food for energy. If your thyroid hormone levels are lower than they need to be, which is the result of an underactive thyroid, that process can’t happen efficiently. Your body produces less energy, and your metabolism slows down.

When your metabolism slows, you may notice some changes in how you feel and function. Symptoms of hypothyroidism can be vague and are common to many other disorders, so you may not initially attribute them to hypothyroidism, but tell your doctor about them anyway. Symptoms to look out for include:

If you experience any of these symptoms, your doctor will perform a complete medical history and physical exam. If your doctor suspects hypothyroidism, he or she will order blood tests to checks hormone levels. They may include tests to measure your levels of thyroid-stimulation hormone (TSH) and T4 (thyroxine).

T4 is the main hormone made by the thyroid. TSH is made by the pituitary gland, the “master gland” in the body. TSH controls when and how much T4 the thyroid produces and releases. Lower than normal T4 levels in your blood usually mean you have hypothyroidism. People can have increased TSH with normal T4. This is called subclinical, or mild, hypothyroidism.

There are many potential causes of hypothyroidism. One is an autoimmune disorder, when the immune system mistakenly thinks the thyroid gland cells are foreign invaders and attacks them. Then there aren’t enough cells remaining to make the hormones.. The most common autoimmune disorder is Hashimoto’s thyroiditis.

Other causes of hypothyroidism include radiation treatment of the thyroid or head and neck region for cancer; inflammation of the thyroid gland; certain medications including amiodarone, lithium, interferon alpha and interleukin-2; congenital defects; surgical removal of all or part of the thyroid; too much or too little iodine, which is necessary to make thyroid hormone; and damage to the pituitary gland.

Hypothyroidism can’t be cured, but in almost all cases, it can be controlled. To treat your low thyroid hormone level, your doctor will replace what your thyroid can no longer make with a synthetic hormone, generally levothyroxine. The levothyroxine pills contain a hormone exactly like the T4  your thyroid produces on its own, so your body can function normally. Your doctor will order regular blood tests to monitor your hormone levels while on the medication.

Some people with hypothyroidism continue to have symptoms while on T4 hormone replacement therapy. They may be give a preparation with the addition of another thyroid hormone called T3. There are challenges, however, to administering T3 so that it is used efficiently and provides its full benefit. A new study out of Rush University Medical Center may have this problem solved.

The study, published in the journal Thyroid in October, offers hope to the 10 to 15 percent of hypothyroidism patients who respond poorly to standard T4 hormone replacement treatment. The study looked at a metal-coordinated molecule to assist in the absorption and metabolism of thyroid hormones.

T3 is necessary to normalize  functional hormone levels in the blood. Unfortunately, T3 metabolizes very quickly, and the body often does not get its full benefits. The goal of the study was to find a way to sustain the level of T3 in the blood so patients benefitted from the additional hormone.

A new drug was studied called poly-zinc-liothyronine (PZL); liothyronine is T3. In the study, researchers successfully treated laboratory rats that had been made hypothyroid with a tablet containing PZL. PZL is a compound made of zinc bound to three L-T3 molecules. The study showed that when researchers took T3 alone, it was immediately absorbed. PZL was not.

More research needs to be conducted before PZL is ready for widespread use. Research includes safety tests in animals and clinical trials in humans. But if you’ve got hypothyroidism that’s not responding to levothyroxine, this study offers hope. You may have a new treatment for your condition in just a few years.