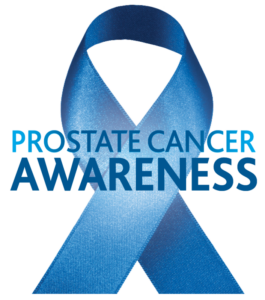 In October, we got an education on breast cancer. Now, in November, it’s time to take a look at the second most common cancer affecting American men, behind skin cancer: prostate cancer. The American Cancer Society estimates there’ll be close to 164,690 new cases of prostate cancer diagnosed in the US in 2018, and more than 29,000 deaths.

The prostate is part of the male reproductive system. It’s a gland that produces some of the fluid in semen that nourishes and transports sperm. It also contracts and forces this fluid out through the penis during orgasm.

The prostate sits below the urinary bladder and in front of the rectum. The urethra, the tube that carries urine and semen out of the body through the penis, runs through the middle of the prostate, so the prostate also plays a role in urine control in men.

Prostate cancer begins when cells in the prostate gland start to grow out of control. If it’s diagnosed early, prostate cancer is very treatable. However, prostate cancer develops slowly, and there may be no symptoms in the early stages. Often, symptoms only become noticeable when your prostate has become large enough to affect function. Common symptoms include:

On the simplest level, prostate cancer is the result of changes in the DNA of normal prostate cells. These changes can be inherited or acquired during your lifetime. We don’t know exactly what causes the acquired DNA changes, but researchers have discovered some risk factors that may contribute.

Problems can happen anytime a prostate cell divides into two new cells because when it divides, it has to copy its DNA, and that’s an opportunity for errors to occur. The more often and quickly prostate cells divide and grow, the more chances for errors. Therefore, anything that speeds up the process of dividing cells increases the likelihood cancer will develop.

Androgens, or the male hormones such as testosterone, promote prostate cell growth. A higher level of androgens in your body might contribute to an increased risk for prostate cancer in some men. Other risk factors for prostate cancer include age, diet, race (it’s more common in African American men), geography (it’s more prevalent in developed nations) and chemical exposure.

Screening is a way to look for signs of a disease before symptoms appear. There are two common screening tests for prostate cancer, the digital rectal examination (DRE) and the prostate-specific antigen (PSA) blood test. PSA is a protein excreted by the prostate that helps semen remain a fluid. An excess of this protein in the blood, however, is one of the initial signs of prostate cancer.

The ACS and other leading authorities recommend that men discus with their doctors the risks and benefits of these tests before choosing if, when and how often to have them done.

Your doctor will use these tests to help diagnose prostate cancer, along with a complete medical history and physical examination. If the test results are abnormal, your doctor may order other tests such as a biomarker test, a PCA3 test and a transrectal ultrasound. He or she may recommend a biopsy to take samples of prostate tissue to look for cancer cells under a microscope.

If your cancer is in an early stage and is only in your prostate gland, your doctor may suggest watchful waiting or active surveillance. This approach involves carefully monitoring this slow-growing cancer without beginning active treatment.

Treatment for prostate cancer may include one or a combination of surgery, radiation therapy, chemotherapy, hormonal therapy and vaccine therapy. Surgery involves removing the entire prostate gland and, if necessary, some nearby lymph nodes. Surgery can be performed using an open or laparoscopic technique.

Radiation therapy uses high-energy x-rays or particles to kill prostate cancer cells. It can be accomplished by using an external machine with its beams aimed at your prostate gland or by placing radioactive seeds directly on your prostate.

Chemotherapy uses powerful medications given by mouth or through a vein to kill cancer cells. Chemotherapy drugs pass through the entire body, so they’re a good option when your prostate cancer has spread beyond your prostate to other areas of your body.

Men, don’t wait till you’re experiencing symptoms. Talk with your doctor and see of prostate cancer screening is right for you. It might catch a cancer when it’s most treatable and survivable.