Someone I know and love was a smoker for most of her life. A few years ago, after a very difficult struggle, she finally quit. Unfortunately, the years of smoking had already done some damage to her lungs, and now she’s suffering from COPD. The weirdest part is she doesn’t seem to understand how she got the disorder. She doesn’t get the connection. 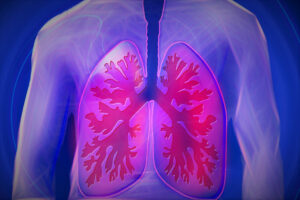 She should have. In the United States, the single biggest cause of COPD is cigarette smoking. In fact, about 90 percent of those who have the disorder are smokers or former smokers. Among people who smoke, 20 percent to 30 percent of them develop COPD. Smoking’s not the only cause, just the most common.

Other causes of COPD include long-term exposure to lung irritants including air pollution and breathing in chemical fumes, dust or toxic substances at home or at work. In rare cases, COPD can be caused by a genetic mutation. Some people have a defect causing a deficiency in the protein alpha-1 antitrypsin, which protects the lungs from damage.

COPD, or chronic obstructive pulmonary disease, actually refers to a group of progressive lung diseases that, over time, make it harder for you to breathe and perform your activities. The two most common diseases and those usually associated with COPD are chronic bronchitis and emphysema.

Most people who have COPD have both chronic bronchitis and emphysema, but the severity of each condition varies from person to person. Thus, the general term COPD is more accurate.

In its early stages, you may not notice the symptoms of COPD or may chalk up the changes to “getting older.” But catching COPD early is imperative to effective treatment and management, so contact your doctor if you notice any of the following symptoms:

To diagnose COPD, your doctor will evaluate your symptoms, take your complete health and family history, perform a physical examination and review test results. The test most commonly used to diagnose COPD is spirometry, a simple test of how well your lungs work. 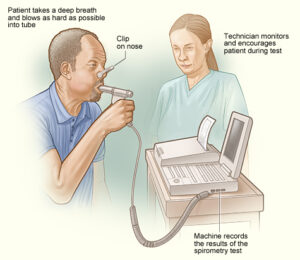 The image shows how spirometry is done. The patient takes a deep breath and blows as hard as possible into a tube connected to a spirometer. The spirometer measures the amount of air breathed out. It also measures how fast the air was blown out.

During a spirometry test, you blow air into a mouthpiece that is attached to a small machine. This machine then measures the amount of air you blow out as well as how fast you blow it. This test can find COPD in its earliest stages and can be used to determine how severe it is. Your doctor will likely use the spirometry results to guide his or her treatment planning.

Your doctor may also order other tests including a chest x-ray or chest CT or to more closely examine your lungs. These tests can also help rule out other disorders as the cause of your symptoms. Through a blood sample, an arterial blood gas test can show how well your lungs are moving oxygen into your blood and removing carbon dioxide from it.

Because every person with COPD has different degrees of chronic bronchitis and emphysema, treatment is tailored to the patient’s unique situation. Treatment is designed to ease symptoms, prevent complications and slow disease progression. It may include medications, oxygen therapy, pulmonary rehabilitation, surgery, and lifestyle changes.

Medications called bronchodilators to help relax the muscles of the airway, which opens the airway so you can breathe easier. Sometimes, glucocorticosteroids, which help reduce inflammation, are added. These medications are generally inhaled through an inhaler or nebulizer. Your doctor may also recommend you get yearly flu and pneumonia shots to reduce your risk of getting those infections, which can harm your lungs.

If your oxygen level gets low, you may be prescribed oxygen therapy to improve that and help you breathe better. With this, you inhale fresh oxygen through prongs in your nose or a mask. Pulmonary rehabilitation may include an exercise program, disease management training, nutrition advice, and counseling. The goal is to help you stay active and able to perform your daily activities.

In severe cases of COPD, surgery may be needed when other treatments have failed. Surgery may be done to remove large air sacs from the lungs or to remove damaged lung tissue. As a final resort, lung transplantation may become necessary. During a transplant, your diseased lungs are removed and replaced with healthy lungs from a donor.

Lifestyle changes can help to both manage the symptoms of COPD you already have and prevent progression of the disease. The first thing you need to do is quit smoking if you do. There are tons of resources on the internet and in your community to help you do this. Also, take steps to protect yourself from exposure to secondhand smoke and chemical fumes.

There’s no specific diet recommended for people with COPD, but a healthy diet is important for maintaining overall health and strength. For your meals, chose a variety of nutritious vegetables, fruits, grains, proteins, and dairy. Drink plenty of non-caffeinated fluids to help keep mucus on the thin side.

Ask your doctor about how much activity you should get and for suggestions for exercise that will be good for you. Maintain a healthy weight because being overweight makes your heart and lungs work harder.

The National Heart, Lung and Blood Institute estimates that 12 million American adults currently have COPD and another 12 million are undiagnosed or are developing the disease. The World Health Organization chimes in with its estimate that 210 million people worldwide have COPD. They go further to say they expect total deaths to increase more than 30 percent in the next ten years.  COPD is already the third leading cause of death in the US.

COPD has no known cure, but treatments and lifestyle changes can help you manage the disease, slow its progression, and most importantly, feel better and remain more active. If you notice any of the symptoms of COPD, don’t wait. See your doctor and get treatment started as soon as possible.