Do you practice yoga or have you ever thought about trying it? I think about it quite a bit, but the problem is I just THINK about it. However, after reading about all of yoga’s benefits, I might actually DO something about it. Like any activity, you can get injured doing yoga, but most doctors agree that the benefits greatly outweigh the risks. 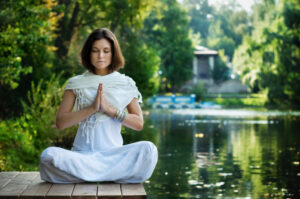 Yoga has an interesting backstory. For starters, it’s a 5,000-year-old practice with origins in ancient Indian philosophy. There are many different styles, or schools, of yoga that typically combine various physical poses (asanas) and breathing techniques to stimulate the body with meditation to relax the mind. In the West, it’s become a popular form of exercise to improve mind-body control and enhance well-being.

The word “yoga” comes from the Sanskrit word “yuj,” which means “to yoke or join together.” Most people believe that refers to the union of the mind and body that occurs with yoga practice. Because there are many styles of yoga with various degrees of complexity, people of all fitness levels can find a style that suites them.

The practice of yoga focuses on your body’s natural tendency to gravitate toward health as well as its ability to self-heal. It works to create strength, awareness and harmony in mind and body. It can help you develop skills for coping and a more positive outlook on life. It also helps you get in tune with both your physical body and your inner self.

As I mentioned earlier, practicing yoga has many health benefits. Research has shown that yoga can help prevent disease and helps recover from it. I’ve read articles with long lists of benefits, but I’ve chose just a few to highlight here.

One of the biggest benefits of yoga is that it reduces stress, and high stress – which is bad enough on its own – is also a risk factor for a bunch of disorders Multiple research studies have shown that yoga can decrease the release of cortisol, which is the main stress hormone. Lower cortisol and lower the stress. Lowering stress helps fight many conditions, including anxiety, depression, high blood pressure and cardiovascular disease. 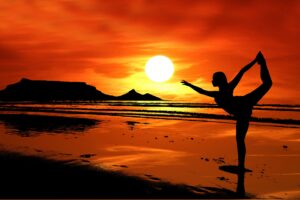 There’s a growing body of research that shows yoga can help reduce chronic pain, a problem that affects millions of Americans. It has been shown to be especially effective in reducing pain due to carpal tunnel syndrome and osteoarthritis. Several studies suggest that yoga may be effective for chronic low-back pain as well.

Yoga improves flexibility and builds muscle strength. After several yoga classes, you’ll likely notice a gradual loosening of your muscles, and you’ll be able to get into poses you couldn’t get into before. You’ll strengthen your muscles as well, and when you build strength through yoga, you balance it with flexibility.

Another benefit of yoga is it gives your immune system a boost. The poses and breathing exercises probably play a part in this, but believe it or not, most of the research supports the role of meditation. Apparently, it gives the immune system a boost at times its called for duty, as in response to an invading organism, but mitigates its function when a reaction is inappropriate, such as with an autoimmune disease like psoriasis.

Yoga has many physical health benefits, but it also has mental health benefits. In addition to fighting depression and anxiety, yoga also helps raise self-esteem. People with low self-esteem often handle their feelings negatively. They might take drugs, drink, overeat, work too hard or sleep around, but yoga is a positive way to direct their energy.

Yoga teaches that its practitioners are manifestations of the Divine. If you practice yoga regularly, you’ll get in tune with your inner self, and you’ll discover that you’re worthwhile. You’ll also experience feelings of gratitude, empathy and forgiveness. Suddenly, you get a sense that you’re part of something bigger, and it gives you a whole new perspective on yourself. Who can’t use a little self-confidence enhancement!