On Saturday, Aug 25, Arizona Senator John McCain succumbed to an especially heinous brain cancer called glioblastoma. Glioblastoma, the most common of all of the malignant primary brain tumors, is the same illness that killed Sen. Ted Kennedy and Beau Biden, the son of former Vice President Joe Biden. 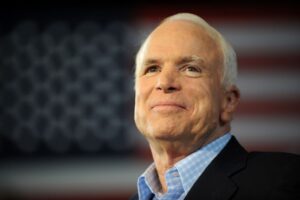 In the United States, there are approximately 18,000 people diagnosed with glioblastoma every year, and an estimated 13,000 die from it annually. As you can see, glioblastoma is a very deadly disease. It is a primary tumor because it starts in the cells of the central nervous system, the brain and spinal cord, and quickly spreads to other cells in the brain.

Glioblastoma is more common in men than in women, and the chances of getting it increase with age. Glioblastoma tumors tend to occur in adults between 45 and 70 years old. A study conducted between 2005 and 2009 found that the median age group for death from brain and other central nervous system cancers was 64.

There are two main types of cells in the brain: neurons, which transmit messages from cell to cell, and glial cells, which provide support to neurons and help regulate the transmission of those messages. Glioblastomas start in the star-shaped glial cells called astrocytes. The tumors generally begin in the cerebrum, the largest part of the brain.

A glioblastoma tumor is highly malignant, or able to spread, because it can rapidly invade nearby healthy brain tissue. As the tumor grows, it puts increasing pressure on the brain, which leads to various symptoms. These include headaches, blurred or double vision, difficulty thinking or remembering, changes in mood or personality, seizures, vomiting and trouble speaking. 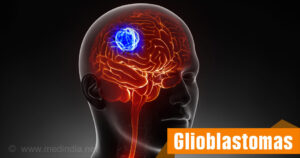 In most cases, the exact cause of glioblastoma is not known. In rare cases, it can occur in people with certain genetic syndromes. In these cases, the affected people typically also have additional symptoms characteristic of those syndromes. Those syndromes are generally caused by mutations to a specific gene.

Diagnosing glioblastoma begins with a history of symptoms and a full physical exam. Your doctor will likely order an imaging test, most commonly an MRI. The MRI can show the size and location of the tumor. Your doctor may also perform a biopsy, the removal of a sample of  tumor tissue to study under a microscope.

If you are healthy enough to have a procedure, treatment for glioblastoma will begin with surgery to remove the tumor. Due to the location of the tumor and how far it has invaded into healthy brain cells, doctors are often unable to remove the entire tumor. However, removing as much as possible, or debulking it, can release some of the pressure on the brain and help reduce symptoms.

Newer treatments that have been showing promise are biological therapies. These therapies target the specific biological functions that are essential for the tumor to grow. They are also designed to be less toxic to healthy cells than radiation therapy and chemotherapy.

Often, glioblastoma tumors return after treatment. If this happens, you can repeat the cycle of surgery, radiation and chemotherapy. You may also want to consider a clinical trial of a new treatment still in the testing phase. Ask your doctor about available clinical trials in your area or visit www.clinicaltrials.gov.

Your doctor may also recommend palliative care. This is a specialized type of medical care that aims to provide relief from your pain and other symptoms. The palliative care doctors work with you, your family and your cancer specialists to provide care that complements any other treatment you may be receiving.

Unfortunately, because glioblastoma is such a malignant and aggressive cancer, the outlook for those affected by it is not promising. There is currently no cure for the disease, and many people who get it live less than a year after their initial diagnosis. Currently, the median survival for adults with aggressive glioblastoma is approximately 14.6 months. The two-year survival is 30 percent. Thank God this is a relatively rare cancer.