The national nonprofit organization Children and Adults with Attention Deficit/Hyperactivity Disorder (CHADD) estimates 10 million adults have ADHD. We hear more about ADHD in children, but 30 percent to 70 percent of kids with the disorder continue having symptoms into adulthood. In adults, ADHD affects men and women equally. 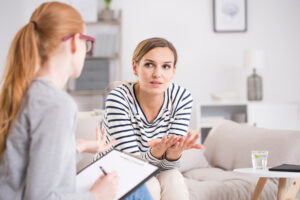 ADHD is a developmental disorder that has emotional, intellectual, behavioral and physical symptoms. These symptoms include distractibility, impulsivity and hyperactivity. They can cause problems in your relationships, as well as your ability to function at work or socially.

Some signs that an adult may have ADHD are commonplace behaviors, so their significance in many cases is not recognized. Aa a result, ADHD in adults often goes undiagnosed.

Common signs of ADHD in adults include chronically running late and driving haphazardly, because they can’t keep their minds on their current task. Problems with self-control, including outbursts of anger or insulting comments, are also signs of possible ADHD.

Some adults with ADHD are easily distracted and have trouble prioritizing and starting and finishing tasks. However, they may become hyper-focused on tasks they enjoy or find fun and interesting.

It’s believed that in people with ADHD, chemicals that transmit messages from brain cell to brain cell, called neurotransmitters, are less active in the parts of the brain that control attention. Thus far, researchers haven’t determined what causes this chemical imbalance in the brain. They believe that genetics may play a role in developing ADHD because the disorder often runs in families.

There are no medical diagnostic tests for ADHD. A diagnosis is generally made by a qualified physician or mental health professional using a thorough history and the guidelines outlined in the American Psychiatric Association’s Diagnostic and Statistical Manual of Mental Disorders, Fifth Edition (DSM-5).

The diagnosis of ADHD in an adult is made based on the number and severity of symptoms and the extent the symptoms impact the person’s daily life. The clinician performs a thorough examination to look for other possible causes of the symptoms, as well as any co-existing conditions.

Once a diagnosis of ADHD is made, a treatment plan is created. Treatment generally involves medications, a specific type of psychotherapy or a combination of both. The type of medications most often used for ADHD in adults is a stimulant. Stimulants actually help affected adults stay focused.

The psychotherapy method most often recommended is cognitive behavioral therapy. This type of psychotherapy focuses on the thoughts and behaviors that are occurring in the present. This differs from other types of therapy that involve looking into the past and resolving emotional problems that began in childhood. CBT may help the person get organized, set helpful routines, repair relationships and improve social skills.

Adults with ADHD don’t grow out of the disorder, but with treatment, many learn to manage and cope with it. Studies show that treatment with stimulant medications and CBT often improves the outlook for adults and decreases the risk for developing other mental health disorders. It also helps people perform better in school or work.