For most of my life, I lived in Pennsylvania and for a while in Ohio. What these states have in common are the dark, dreary, depressing winter months. For me, they were really depressing because I suffer from SAD, seasonal affective disorder. I even ordered a therapeutic lightbox from Alaska, which I willed to my former officemates in Cleveland when I moved to Florida. 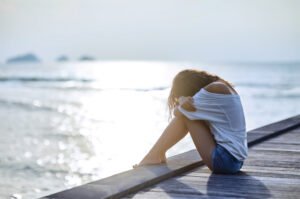 I’m not the only one who gets depressed during the dark months of the year. SAD affects about 4 percent to 6 percent of the US population. People with SAD in the winter typically feel lethargic, sleep a lot, eat more and gain weight, and generally stay inside until spring.

Getting SAD in the winter kinda makes sense, mainly because daylight is sparse and you have no energy to do anything anyway. Amazingly though, about 10 percent of people with SAD get symptoms of depression during the daylight-heavy summer months. It’s called reverse SAD or summer SAD.

People who get SAD in the summer typically have symptoms that are the opposite of those of winter SAD. They generally can’t sleep or don’t need as much sleep, eat less and lose weight and are agitated or anxious instead of lethargic. One thing people with summer SAD have in common with their winter counterparts is the tendency to avoid outside activities, which can lead to isolation. Not good!

Researchers have no definitive answers for what causes summer SAD. There’s been more research done on winter SAD because it’s more common, but studies that have been done on summer SAD point to a few possible reasons for its development.

Dearth of daylight is known to be a culprit in winter SAD. An overabundance of it is thought to contribute to the summer variety. Sunlight affects the production of melatonin, a powerful antioxidant and free radical scavenger that’s an ingredient of the neurotransmitter serotonin, which plays a role in controlling mood.

Messing up melatonin screws up the serotonin levels in the brain, which can lead to mood changes, including depression. Melatonin also affects the sleep-wake cycle, altering sleep patterns.

The higher summer temperatures are suspected of contributing to summer SAD, too. The heat in the summer can be oppressive and agitating to people with SAD. Some research suggests summer SAD has a genetic component. It’s been found that as many as two-thirds of people who suffer with SAD have a family member with a major mood disorder.

Researchers have floated a few other theories as well. Some suggested a link between SAD and allergies. Others are trying to determine if the season you were born in has any impact on the development of a seasonal mood disorder.  Sounds pretty out there to me!

If you get depressed during the summer months, there are some things you can do to help you get through it. Here are a few tips:

Don’t suffer in silence. Consider talking to a qualified therapist to share your struggles and get some management strategies. Another option is a physician or psychiatrist. Medication may be an appropriate treatment for you.

Get enough sleep. You might not feel like sleeping, but not getting enough can trigger symptoms or make them worse. The recommendation for adults is seven to eight hours of sleep per 24-hour period.

Don’t forget to exercise. Summer is a busy time, but take time to get in a workout. Physical activity is known to fight the symptoms of depression. Schedule your exercise for early mornings or evenings when it’s not so hot outside or consider an indoor exercise routine to beat the summer heat.

Don’t overdo dieting. I know you want to fit into that bathing suit, but being on a restrictive diet can make you feel stressed and unhappy. Instead, eat a healthy, balanced diet rich in protein, fruits and vegetables.

Plan ahead. If you currently take medication for a mood disorder, consult your doctor in the spring. He or she may adjust your dose ahead of time to prepare you for the depression of summer SAD that’s coming your way.

If you get SAD during the summer, take heart; fall’s just a few months away!