Some 55,000 more women than men have a stroke each year, and more women die as a result, according to the American Heart Association, which has deemed May as American Stroke Month. 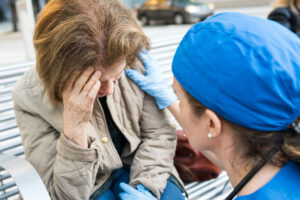 Women share many of the same risk factors as men, such as high blood pressure, irregular heartbeat, diabetes, depression and emotional stress. But for women, hormones, reproductive health, pregnancy and childbirth also can influence how likely they are to suffer a stroke.

For instance, stroke risk increases during a normal pregnancy because of natural changes in the body such as increased blood pressure and stress on the heart. And women who have preeclampsia, or high blood pressure that develops during pregnancy, double their risk of a stroke later in life.

Women who have more than one miscarriage may be at greater risk for blood clots, which in turn increases their stroke risk.

Irregular heartbeat, or atrial fibrillation, quadruples stroke risk and is more common in women than men after age 75.

Strokes also are considerably more common in women who suffer from migraines with aura (flashing or shimmering lights, zigzagging lines or stars) and who also smoke.

Autoimmune diseases such as diabetes or lupus can increase the risk of stroke, too.

Because women generally live longer, a stroke is more apt to negatively impact their lives. They also are more likely to be living alone when they suffer a stroke and to end up in a long-term health care facility, and they have a more difficult recovery, according to the National Stroke Association.

Some stroke symptoms are unique to women, including hiccups, seizures, sudden behavioral change and hallucinations. Those might not be recognized as signs of a stroke, however, which could delay treatment and magnify the damage caused. The most effective stroke treatments are only available if the stroke is diagnosed within three hours after the first symptoms appear.

While strokes typically affect women in their later years, doctors now are focusing on helping women reduce their risk earlier in life. That means more screening for high blood pressure – which is more common in women than in men – along with other health challenges.

As for physical activity, a recent study shows that people can reduce their stroke risk if they exercise five or more times per week.