By the time he had reached the end of this 20-year playing career, basketball legend Kareem Abdul-Jabaar had become known as much for the safety goggles he wore during games as the skyhook he used to become a 19-time NBA All-Star and six-time NBA most valuable player. 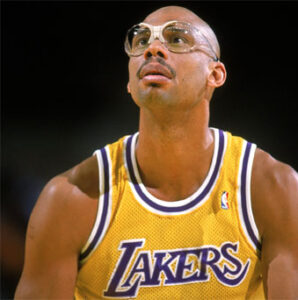 It was the result of repeated eye injuries, the last one being a second scratched cornea that he suffered midway through the 1974 season he spent with the Milwaukee Bucks, that prompted Abdul-Jabaar to don the goggles, explaining “I’m down to my last pair of eyeballs.’’

Nearly 50 years later, the chances of an athlete suffering an eye injury such as those that prompted Abdul-Jabaar to don his goggles are still great as more than 25,000 professional and recreational sports participants seek care for sports-related eye injuries each year, according to Prevent Blindness®.

Just as great are the chances of preventing most of those injuries. With the use of proper eye-ware, 90-percent of all eye injuries, including many that occur during sports or recreational activities, can be prevented, according to the American Academy of Ophthalmology.

The AAO has thus designated April as Sports Eye Safety Awareness Month, and the organization’s timing could not be better. With spring-like temperatures already upon us and summer drawing near, more and more people will begin engaging in water and pool activities, which is where most eye injuries occur.

Virtually all sports and recreational activities, including golf, fishing and cycling, carry some risk of eye injuries. As we noted, though, most of those injuries can be prevented by following some simple, common-sense rules and knowing wearing equipment designed to protect wearers from eye injuries.

For anyone playing basketball or racquet sports, for example, a pair of proper safety goggles – those labeled as ASTMF803 approved – can go a long way toward preventing serious eye injuries. So can the use of helmets with face shields for those participating in baseball, football and hockey.

One thing to keep in mind is that regular prescription eye glasses do not provide enough protection to prevent serious eye injuries. In some cases, they can even increase the chances of an eye injury being more serious than it needed to be. That’s why, for many athletes, it’s makes good sense to get a good pair of prescription eye guards.

Eye guards are becoming more prevalent, not just in professional sports, but throughout the youth sports culture as well, and for good reason. A good pair of eye guards costs between $20 and $40 dollars, which could be a fraction of what the cost associated with repairing even a minor eye injury could be.

A pair of prescription eye guards will be more costly, of course, but that cost may not be any greater than the cost of replacing a pair of contact lenses. And as Abdul-Jabaar pointed out all those years ago, the cost, no matter how great, will always be cheaper than that associated with replacing the only set of eye balls you’ll ever have.