For about 10 percent of women in their childbearing years, a difficult, sometimes agonizing condition called endometriosis is an unwelcomed reality. This disruptive disorder, which primarily strikes those in their teens to their 40s, affects an estimated 176 million women worldwide. There’s a lot we know about endometriosis, and a lot we don’t. 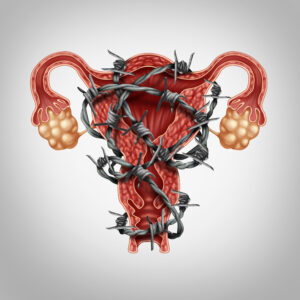 For starters, we know endometriosis occurs when the type of tissue that lines the uterus, called the endometrium, is found growing outside of the uterus. Most often, this tissue is found on the ovaries, fallopian tubes, peritoneum, rectum, lymph nodes, and bladder and other pelvic organs. These areas of tissue are called endometriosis implants.

During a woman’s menstrual cycle, the endometrium in the uterus gets thicker in response to estrogen to prepare for implantation of a fertilized egg. If an egg is not fertilized and implanted, the cells of the thickened endometrium are sloughed off, and you have the bleeding of the menstrual period.

There’s a problem, however, with the endometriosis implants growing outside of the uterus. They also build up in response to estrogen, but they have nowhere to bleed at the end of the cycle. This leads to inflammation and pain that can be excruciating. It can also lead to the formation of cysts and scar tissue, called adhesions. These adhesions can cause pelvic organs to stick together, causing pain and interfering with function.

Pelvic pain is the most common symptom of endometriosis. Other symptoms include painful periods, low back pain before and during menstruation, cramps, heavy menstrual bleeding, pain during sex and pain during bowel movements. In addition, 30 to 40 percent of women with endometriosis suffer from infertility.

One of the things we don’t know about endometriosis is what exactly causes it. There are, however, several theories. One of the theories is that endometrial tissue has the ability to turn into and replace other types of tissue outside of the uterus.

Another theory is endometrial tissue fragments travel through blood vessels or the lymphatic system to other parts of the body, where they settle and grow. Another involves dysfunction of the immune system. Researchers have demonstrated, however, that endometriosis runs in families, so there is a genetic component to its development.

Being of childbearing age is the biggest risk factor for developing endometriosis, but there are others. Additional risk factors include having menstrual cycles shorter than 28 days and having periods longer than seven days. If you had your first period before age 12, you’re at a higher risk, as you are if you’ve never been pregnant.

Diagnosing endometriosis can be a challenge because other conditions have similar symptoms. For women in the US, it can take 10 to 12 years to get a correct diagnosis. Your best bet for an accurate diagnosis is to find a doctor who specializes in endometriosis.

A knowledgeable OB/GYN will often suspect endometriosis based on your history and physical examination. It’s important to be totally honest with your doctor about your symptoms. Your doctor may order an imaging test such as an ultrasound, MRI or CT scan to look for cysts or adhesions, but the only definitive way to diagnose endometriosis is by laparoscopy.

During a laparoscopy, which is a minimally invasive surgery, your doctor will insert a slender tube with a camera attached to it through a tiny incision in your abdomen. He or she can then see the misplaced tissue and remove the endometriosis implants during the same procedure.

Treatment for endometriosis may include anti-inflammatory medications for pain and/or hormone medications to suppress the production of estrogen. Laparoscopic surgery may be used to remove the problematic tissue. If all else fails and symptoms impact the quality of your life, removal of your uterus and ovaries is a last-ditch option to treat this devastating disorder. 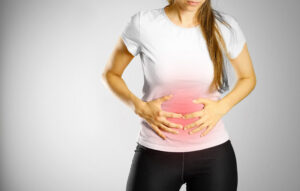 None of these treatments is a cure, and endometriosis pain can continue or return. So, you might want to also look at alternative treatments that have proven to benefit other painful conditions. They may help with endometriosis pain, as well. These include acupuncture and acupressure to relieve pain, and meditation to lower stress and ease pain.

Symptoms of endometriosis generally improve after menopause, when production of estrogen is significantly decreased. But in the meantime, don’t suffer. Tell your doctor in detail about the symptoms you suffer. Together, you and your doctor can create a treatment plan that works best for you.