Recently, I had a chance to learn more about a common oral health problem. The problem is peridontal disease, or periodontitis. According to the US Centers for Disease Control and Prevention, 47.2 percent of American adults age 30 and older have some form of gum disease. They add that gum disease increases with age, with 70.1 percent of adults 65 and older affected by it. 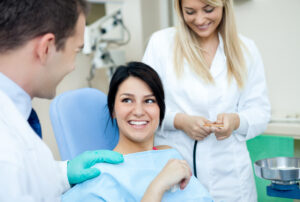 How does a person get to that point? I’ll try to explain. Periodontitis generally starts with gum inflammation, a condition called gingivitis. It’s called gingivitis because this inflammation primarily affects the gingiva, the part of the gums surrounding the neck of the teeth.

If you brush and floss regularly, it will remove most of the plaque that naturally builds up on your teeth. But if you don’t, some plaque may remain. Bacteria in this plaque can cause the gums to become irritated, which is gingivitis. When this occurs, it’s common for the gums to bleed when brushed. Other gingivitis symptoms include red, swollen and tender gums, and bad breath.

Even though your gums may swell and bleed with gingivitis, no irreversible damage to your bone or other tissue typically occurs at this stage. Your teeth are still secure in your jaw. And with proper care and good oral hygiene, you can restore your gum health on your own at this point in the game.

If you don’t treat your gingivitis, however, it can progress into full-blown periodontitis. Like gingivitis, periodontitis is also caused by an overgrowth of bacteria, and it can lead to red, swollen and bleeding gums. But, periodontitis generally also leads to tissue damage that cannot be repaired without professional intervention.

If you develop periodontitis, it’s likely you’ll see gum pockets start to form around your teeth, which provide an opening between the gum tissue and the teeth. This opening enables bacteria and tartar to get under your gum line, which can lead to bone destruction. With bone loss, your teeth can become loose and eventually fall out.

To make matters worse, researchers are also studying possible links between the bacterial infection of periodontitis and other health conditions. Some studies suggest a possible connection between gum disease and heart disease, stroke, premature births, diabetes and respiratory disease. Research is ongoing to further study these potential links. 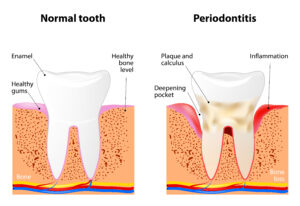 Treatment for periodontitis typically starts with deep cleaning. During a deep cleaning, the problem plaque is removed using a method called scaling and root planing. Scaling involves scraping off the tartar from above and below the gum line, and root planing is removing the spots on the tooth roots where the bacteria accumulate. You may also be prescribed antibiotic medications to take along with the deep cleaning.

If the deep cleaning and medications fail to reduce the inflammation and tighten your gum pockets, surgery may be the next option. The most common surgical technique for periodontitis is flap surgery, which involves lifting back the gums, removing the tartar and reattaching the gums. Along with this, the dentist may place bone and tissue grafts to regenerate lost tissue.

Instead of surgery, some dentists offer an alternative treatment for periodontitis using laser technology. During this procedure, the laser penetrates deep below the gum line to destroy the bacteria and restore your gum health.

There is some good news. You can reverse gingivitis and prevent any progression to periodontitis by keeping your teeth and gums healthy. To do that, practice good oral hygiene: brush your teeth twice a day with a fluoride toothpaste, floss regularly, and visit your dentist routinely for checkups and cleanings. And if you smoke, quit. It’s not healthy in general, and it’s a big risk factor for mouth and gum diseases, including cancer as well as periodontitis.

There you have it. Now that you know more about gum disease, you’re aware of what to do to avoid it. You also know how to treat it if you’re one of the 47.2 American adults dealing with gum disease. Good health to your gums!