Who’s afraid of fungus? If you’re like me, you probably don’t think too much of fungi you can see, like mold on a piece of bread or a mushroom. But the tiny fungi living on your skin and inside your body can grow out of control and cause annoying, and sometimes serious, infections. Fungal infections are extremely common. 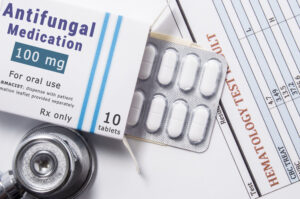 A July 2017 article in The Lancet reports these infections affect more than one billion people world-wide each year. What’s frightening is that these result in approximately 11.5 million life-threatening infections and more than 1.5 million deaths per year. You read that right, deaths from fungi.

When I hear “fungal infection,” I immediately think of the common culprits: athlete’s foot, yeast infections, jock itch, toenail fungus and diaper rash. These uncomfortable conditions have a few things in common. They’re all relatively mild skin infections, are easily treated with over-the-counter or prescription medicines, and are all caused by a strain of fungus called Candida.

According to the US Centers for Disease Control and Prevention, there are more than 150 species of Candida. The majority of infections in humans are caused by a species called Candida albicans. C albicans infections occur mostly on the skin, but can enter the bloodstream and become invasive. The CDC says there are about 46,000 cases of invasive infection with this fungus in the US annually. These invasive infections can be very serious, even fatal.

Recently, another Candida species popped up on the scene that’s causing some alarm in health officials. It’s called Candida auris. C auris is a fungus to be feared. It’s deadly and some of its strains are multi-drug resistant. Infection with this fungus has been found in more than a dozen countries, including the US. Here, it typically strikes people in hospitals and nursing homes who have one or more medical conditions.

People who are sick are at greater risk for C auris infection because their immune systems are weakened by their illnesses. People who have been recently treated with antibiotic or anti-fungal medications are also at risk, as are those who have tubes going into their bodies. These include tubes to help them breathe or eat, central lines in their veins, or catheters in their bladders.

These infections can be difficult to detect. Symptoms of C auris infection are often not noticeable because of the patients’ other illnesses. Symptoms also depend on where in the body the infection occurs. C auris causes wound and ear infections, as well as infections in the mouth and genitals. It can also enter the bloodstream, and causes sepsis, which can slow blood flow, damage organs and lead to death.

C auris is a huge concern to health officials because it is often resistant to multiple types of medications used to treat fungal infections. Fortunately, the cases identified in this country so far have responded to one class of anti-fungal drugs called echinocandins.

Another concern surrounds the proper diagnosis of C auris infections. That requires specialized laboratory technology and methods, which are not universally available. Misdiagnosis can lead to mismanagement of care and increased spread of the infection. Spread occurs through contact with equipment or surfaces contaminated with the fungus, or from person to person contact. Early detection and good hygiene are the best weapons against C auris infections.

It’s important to be aware of this new fearsome fungus, but it’s not time to panic. C auris infections are still pretty rare in the US. If we’re educated and vigilant, they can stay that way!