Millions of Americans are being robbed of their vision, and many of them don’t even know it. 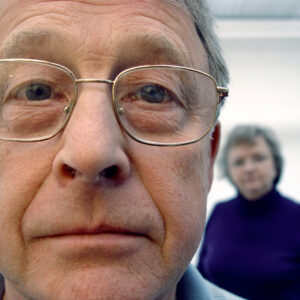 They have glaucoma, often called “the silent thief of sight” because it can cause irreparable harm before the patient notices any vision loss, which can’t be reversed. The disease is the leading cause of blindness in the United States and can occur at any age, although it’s more common among older adults.

January was National Glaucoma Awareness Month, so now is a great time to become familiar with the condition, what causes it and what can be done to treat it.

Glaucoma is actually a group of diseases that damage the optic nerve, a bundle of more than a million nerve fibers carrying information from the retina to the brain. The retina, the light-sensitive tissue at the back of each eye, is vital to good vision.

The two main types of glaucoma are open-angle and angle-closure, which refers to the drainage angle where the iris (the colored part of the eye) meets the cornea (the outer covering). Open-angle is the most common type of glaucoma, accounting for at least 90 percent of the cases.

Both forms of the disease are caused by increased pressure inside the eye resulting from impaired drainage of the clear fluid flowing in and out of the eye to nourish nearby tissues. The fluid can build up when the eye’s drainage canals become clogged over time (open-angle glaucoma) or are blocked completely (angle-closure).

Open-angle glaucoma is a slow-developing, lifelong condition, and symptoms and damage aren’t noticed in its early stages. As the disease progresses, patients may develop patchy blind spots or tunnel vision.

Angle-closure glaucoma can cause eye pressure to increase within hours, demands immediate medical attention and can result from other conditions, such as cataracts or tumors. Symptoms may include severe headache, eye pain, redness, nausea and vomiting, blurred vision and halos appearing around lights.

Not everyone whose eye pressure increases will develop glaucoma because some people can tolerate higher levels than others. A comprehensive exam can determine what level of eye pressure is normal for each patient. 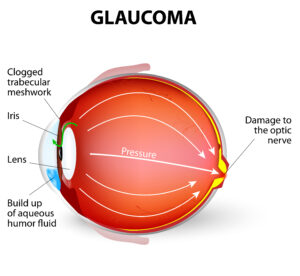 Also, there’s a form of glaucoma called low-tension or normal-tension that can develop without increased eye pressure.

Immediate treatment for early-stage, open-angle glaucoma can delay the disease from worsening, which is why early diagnosis is so important. Drops or pills can help lower eye pressure, either by causing the eye to produce less fluid or by helping it drain.

An outpatient laser procedure can open the drainage holes in the eye, allowing the fluid to drain better. Another option is conventional surgery that involves making an incision into the eye’s drainage system to create new channels for a more normal flow of fluid. Shunts or stents also can be implanted in the eye to increase the flow.

Consult an eye care professional for more information on diagnosing and treating glaucoma.