In the past, cervical cancer was one of the top cancer killers of women in the United States. But with the introduction of the Pap smear in the 1950s and a growing focus on getting that test, cervical cancer diagnoses and deaths decreased by more than 60 percent. Today, cervical cancer ranks 14th among most common cancers affecting American women.

Yet, as we wrap up 2017, we learn there were approximately 12,800 new cases of invasive cervical cancer diagnosed last year, with about 4,200 deaths. (They’re still tabulating.) That’s a lot fewer deaths than there were in 1975 (5.6 per 100.000 women), but it’s still too many. This month, let’s take a closer look at cervical cancer and its risk factors, and see what we can do to lower our risk and establish cervical health. 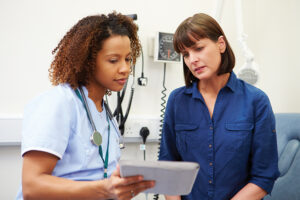 In simple terms, cancer is the uncontrolled growth and spread of abnormal cells. This can occur in just about any area of the body, and in some cases, the exact reason the abnormal cells begin to grow is unclear. Cervical cancer begins in the cells that line a woman’s cervix. The cervix is the lower section of the uterus that connects the main part of the uterus to the vagina.

Like it does in many types of cancer, genetics plays a key role in the development of cervical cancer. The growth and division of cells is controlled by our cells’ DNA, which makes up our genes. Cervical cancer can be initiated by mutations to that DNA, causing the cells to grow out of control. With cervical cancer, there are risk factors that make this process more likely to occur.

Infection with the human papillomavirus, or HPV, is one of the strongest risk factors for cervical cancer. HPV has been found to produce proteins that affect certain genes and allows cervical cells to overgrow. HPV also causes changes to other genes that can lead to the development of cancer. It greatly increases a woman’s chances of getting the disease.

Regrettably, HPV, primarily a sexually transmitted infection, is very common. About nine in ten people will be infected at some point in their lives. Fortunately, today there are very safe and effective vaccines to prevent HPV infection. These vaccines are most effective if given to boys and girls before they become sexually active.

There are other risk factors that increase the odds of developing cervical cancer. These include having a family history of cervical cancer, smoking, having a weakened immune system, being infected with chlamydia (another STI), eating a diet low in fruits and vegetables, and being overweight. Long-term use of birth control pills and use of IUDs can also contribute, as can having multiple babies and having your first baby before you were 17 years old.

In most cases, cervical cancer begins with pre-cancerous changes in the cells of the cervix that, without intervention, can develop further into full-fledged cancer. That’s where Pap tests have proven their worth. Pap smears can detect these pre-cancerous changes when done on a routine basis. They can also catch the cancer in its early, most treatable stages.

In the early 1970s, the most common treatments for cervical cancer were cone biopsy and hysterectomy. Today, common treatments include surgery, radiation therapy, chemotherapy and targeted therapy, and most often a combination of these treatments is used. Treatments chosen depends on whether the cancer is caught at an early stage or is advanced. For stage 1, or early cervical cancer, the five-year survival rate is about 93 percent.

Ninety-three percent is pretty good, but that’s if you catch the cancer very early on. To do that, you need to keep to your routine pelvic exam and Pap test schedule. Follow your doctor’s recommendations for how often to have these tests performed. These can vary by age and number of individual risk factors. There are additional steps to take to reduce your risk as well.

One step is to reduce your chance of HPV infection. Limit your number of sexual partners and use a condom every time you have sex. In addition, get vaccinated against HPV. While the vaccine is normally given to younger boys and girls, people up to age 26 are eligible to receive it.

Other preventive steps include quitting smoking, eating a diet rich in fruits and vegetables, and maintaining an appropriate weight. There’s nothing you can do if you’ve got a family history of cervical cancer, you can’t change your genes, but living a healthy lifestyle is a benefit to your cervical health and your overall health. Think about it.