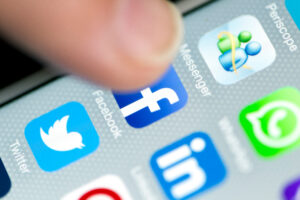 Recently, my sister and I went out for breakfast and noted how many people in the restaurant had their heads buried in their cell phones. Even babies and toddlers had phones and tablets and were staring at images on the screens. If there was any conversation at those tables, it was about something heard or seen on the phone.

This is not an unusual occurrence. According to a 2017 survey by the American Psychological Association (APA), more than 65 percent of American adults – and 90 percent of 18 to 29-year-olds – use social media. Facebook and Instagram are particularly popular, with more than 2 billion users signing on every month.

Talk about popular – a typical teen, age 13 to 17, sends more than 3,400 texts every month. This equates to seven texts every waking hour. Of course, when a teen is in the middle of a text conversation, that number is even higher.

Social media is a magnificent tool. It makes a lifetime of possibilities available at the press of a key. There are many benefits to social media. It makes the world a much smaller place and communication much easier to accomplish.

For one thing, social media expands access to education and health care. Teachers and doctors no longer have to be in the same room as their students and patients, expanding availability to more people at more convenient times and locations. Research on school topics and health issues is quick and easy. People just need to learn which sites are credible sources of information and which aren’t.

Other benefits of social media include easier banking and bill paying, introduction to new products and services, greater communication with friends and family members, and faster response in times of emergency or disaster.

But if you’re spending all your time on social media, what’s happening to your interaction with people and your relationships? If you can get all the information you need on your phone, are you actually learning and retaining anything? If you’re walking down the street or driving while texting or talking on the phone, are you really paying attention to what’s going on around you?

We know family relationships suffer. Of the respondents to the APA survey, 45 percent said technology makes them feel “disconnected from their families even when they’re together.” That’s only the tip of the iceberg. Other studies have shown that kids who spend long hours on social media don’t learn facial and body language cues, making them less able to communicate face-to-face with others.

Education expands with social media, but it also suffers. In a study published in 2016, 89 percent of student studied said the biggest disadvantage of social media in the classroom was they don’t pay attention and therefore miss instructions and important information.

Also, because students use shortcuts and letters for words on social media, they don’t develop a facility in proper spelling and grammar in written communication. It can also make it difficult for people who don’t use technology as often to understand the context of a message. And because there’s so much “noise” on social media, it’s hard for people to retain what they see and read.

If you think you can do two things at the same time, like driving and talking on the phone, think again. True multitasking is a myth. Neuroscience has proven the brain can’t actually perform two activities at once. Instead, it quickly toggles from one thing to the other. The brain works fast, but it still takes it a few beats to change focus, and that’s when mistakes and accidents can happen.

So, go ahead and take advantage of social media, but use it wisely!