We mustn’t forget that August is Psoriasis Awareness Month. As we close out the month, let’s take a closer look at this irritating, chronic condition. Psoriasis is more common than you might think. A recent national survey by the US Centers for Disease Control and Prevention estimates that 6.7 million American adults suffer with the condition.

Psoriasis is an autoimmune disease. It occurs when your protective immune system sends faulty signals to your skin. These signals tell the skin cells to grow at a faster rate than usual. Healthy skin sloughs off excess cells that hit the skin’s surface and die. But with psoriasis, skin cells multiply too rapidly, and dead cells pile up on the surface, causing thick patches to form. 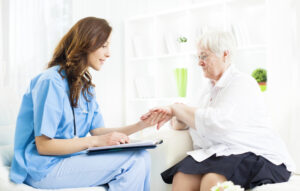 These patches generally surround red skin and have loose, silvery scales on them. They most often appear on the elbows, knees, scalp, torso, palms and soles of the feet, but they can be found on other areas of the body as well. This is also known as plaque psoriasis.

For many people, psoriasis is embarrassing and unsightly, but it has some physical symptoms, too. In some cases, the scaly patches become itchy and painful. The skin may also crack and bleed. In addition, the patches may grow together and cover large areas of the skin.

Psoriasis in certain areas of the body may be mistaken for other conditions. When psoriasis affects the fingernails and toenails, you may notice small pits in the nails or yellowish-brown separations. Nail psoriasis is often misdiagnosed as a fungal infection. Psoriasis on the scalp can look like severe dandruff or a type of dermatitis.

People who have psoriasis experience cycles of remission and flare-ups throughout their lives. There are a number of factors that can lead to flare-ups, ranging from bacterial infections to injuries to emotional stressors. Nearly 80 percent of people with psoriasis report flare-ups after experiencing stress, such as a new job or a loved one’s death.

Certain medications, including ibuprofen, can also lead to flare-ups. Some people note a worsening of symptoms in the colder winter months.

Most of the time, psoriasis can be diagnosed from the physical examination and patient history alone. In cases where the psoriasis resembles an infection or another disorder, closer study of the tissue via a skin biopsy may be needed.

Treatment of psoriasis depends on the severity of symptoms. The goal is to control flare-ups and prevent infections that might develop due to the destruction of the skin’s normal protective barrier function. Treatment falls into three general categories: topical, systemic and phototherapy. 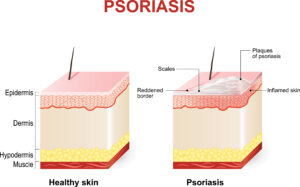 Topical treatments include topical steroids in various formulations and strengths; ointments containing salicylic acid, lactic acid and a form of Vitamin D; and a topical retinoid. Systemic treatments include medications such as methotrexate, acitretin, cyclosporine and mycophenolate mofetil.

Newer biologic injectable medications are now also available to treat psoriasis. These include Humira, Enbrel, Remicade and Stelara. Some of these can be self-administered and some must be administered through an IV by your physician or staff.

Phototherapy involves carefully monitored exposure of your skin to ultraviolet light. It can be used alone or in combination with a topical or systemic therapy. Phototherapy uses both UVA and UVB light, and the therapy is generally provided in a dermatologist’s office or a treatment center under close supervision.

Psoriasis is an irritating and often embarrassing condition. There is no cure, but it can be treated and generally kept under control. While this condition can look pretty bad when it flares, it’s not life threatening and not contagious. To get it, you must inherit the genes that trigger your immune system to send the faulty signals to your skin cells.

Research on psoriasis and additional treatments for it is ongoing. If you suffer from this disorder, consider joining a clinical trial of a new treatment. To find a clinical trial near you, visit ClinicalTrials.gov.