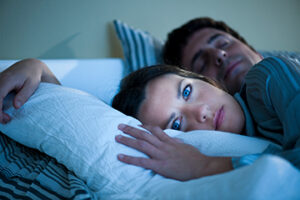 The promise of better sleep makes me want to go camping. Sleeping outdoors for just a few nights – without a smartphone – is enough to reset body clocks in a way that makes it easier to get more sleep, according to studies.

The crux is how light affects circadian rhythms, the body’s built-in system for signaling sleep time and when to wake.

Camping provides exposure to plenty of natural light and dark, which researchers suggested prompted a shift in the campers’ sleep-wake cycles. Their levels of melatonin, a hormone associated with sleepiness, started to rise around sunset. They went to bed much earlier than they did at home and woke around sunrise.

In other words, their bodies began to follow a sleep schedule more in tune with the light-dark patterns of nature.

I’ve been fascinated about the role of light and how it affects sleep. After a bout of insomnia several years ago, I read how exposure to bright morning light  helps you fall asleep at night and decided to try it.

You aren’t supposed to wear sunglasses because your eyes need to be exposed directly to the sunlight. Since I’m a slow mover in the morning – no first-thing-in the a.m. walks are typically on my schedule – I just sat in the middle of my backyard right after waking and had coffee. It was pleasant and maybe it helped. Coincidence or not, I started to fall asleep again at a decent hour.

We all know how artificial light has changed how we sleep. But I never knew how much until reading about the myth of eight-hour sleep and how people once snoozed.

It goes way back before the invention of the light bulb, in fact: Until the late 17th century, “bi-modal sleep patterns” were the norm. People went to sleep for four hours about two hours after the sun went down. This “first sleep” was followed by one to two hours of wakefulness, then another “second sleep” of four hours.

People started sleeping in the now-familiar eight-hour stretch when they had more things to do at night, thanks to more use of candles and other forms of lighting.

An experiment by a researcher in the 1990s showed how two-part sleep cycles could be a natural inclination. Study participants naturally started sleeping in two four-hour shifts, punctuated by one or two hours of being up. This occurred after they had been exposed to darkness for 14 hours every day for a month.

Today, of course, we can live in a world of 24/7 artificial days, if we choose, and there are sleep-busting forms of light that our ancestors never imagined. It’s not enough to be tempted by the fact that we don’t have to turn off the light and go to bed, if we have work to do or just want to stay up.

We now have to deal with avoiding things like smart phones and tablets because of the spectrum of light they emit. Digital screens emit blue light, which can interfere with melatonin production and throw sleep cycles out of whack. Teens may be particularly susceptible to sleep-interference from blue light from electronics close to when they should be sleeping.

Sleep experts recommend avoiding blue light before bedtime. Put down the tablets and smart phones early on as a nightly ritual for better rest. This puts midnight scrolling in the realm of midnight noshing. You know it’s not good for you … but temptation is hard to resist and screens-at-all-hours become a habit.

Maybe it’s time to go camping for a body clock reset under the bright light of real days and the darkness of actual nights.