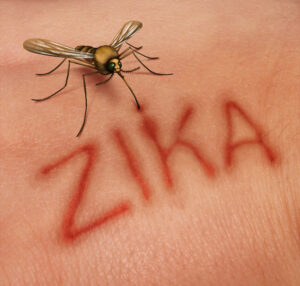 It happened. The Zika virus has struck in the United States, and it hit close to home. It was recently announced that four Florida residents, three men and one woman, were the first known instances of local transmission of the virus.1 Until now, the cases of Zika virus in the US had come after the people traveled to a country where the virus is being transmitted or had sex with someone who traveled to one of those areas.

Local transmission means it was our own mosquitoes that carried the virus. The four North Miami residents who were infected weren’t bitten by carrier mosquitoes somewhere else and brought the illness home with them. They got it right here in Florida.

The Florida Department of Health (DPH) has yet to find any infected mosquitoes in the neighborhood where the four affected people live. None of the mosquitoes DPH has trapped thus far have tested positive for the virus, but that’s a billion-to-one proposition considering the population of the insects in South Florida this time of year. At any rate, the DPH believes the transmission of the virus occurred several weeks ago.

Officials also believe the area of active transmission is confined to the small neighborhood north of downtown Miami. They are still investigating, including doing a door-to-door canvas requesting information and urine samples to determine if any other residents have been infected. They expect more cases.

It wouldn’t be unusual for people infected with the Zika virus to not know they have it. Many people with the virus experience no symptoms, and many who do experience mild symptoms that don’t overly alarm them. The most common symptoms are fever, rash, joint pain and conjunctivitis (red eyes). They might also experience some muscle pain and headaches.

For most folks, the disease that results from the Zika virus isn’t too bad. It causes those uncomfortable symptoms for a few days to a week. However, for pregnant women, the virus can be devastating. It can be transmitted to the baby during pregnancy and can cause a serious birth defect called microcephaly (“small head”) and other severe brain defects. For older individuals, the virus has been known to trigger an uncommon nervous system condition called Guillain-Barre Syndrome.

Keep in mind that the Zika virus is transmitted through the bite of an infected mosquito, specifically a mosquito of the Aedes species (Aedes aegypti and Aedes albopictus). The Centers for Disease Control and Prevention (CDC) reports that these mosquitoes are aggressive daytime biters. That doesn’t mean you’re safe at night. You’re not. They bite at night as well.

The best prevention against the Zika virus, then, is to avoid getting bitten by a mosquito. The CDC has some advice to help you with that.4 There are a few basic tips for preventing bug bites, including those from Zika-bearing mosquitoes.

Use insect repellant. Use a product that contains at least 20 percent DEET. The higher the percentage of DEET, the longer the protection lasts. This maximizes at about 50 percent. Other products also repel mosquitoes, including picaridin and oil of lemon eucalyptus.

Cover exposed skin. When you can, wear long-sleeved shirts, long pants with socks and a hat. This does double-duty because it saves your skin from the harmful effects of the sun as well.

Avoid bugs where you are staying. Choose to stay in places that have air conditioning or windows with screens to keep the mosquitoes out. If such accommodations are unavailable or if you are staying outside, sleep under a net or in a tent that has been treated with insect repellant.

After the four people were found infected in Florida, the CDC said it expects to see more cases of locally transmitted Zika virus in the US. They stress the importance of taking the noted precautions against getting bit, especially for pregnant women.

Even if you don’t live in Florida, don’t take a chance. Mosquitoes are everywhere. Protect yourself from their bites by following the CDC’s advice and using your common sense.