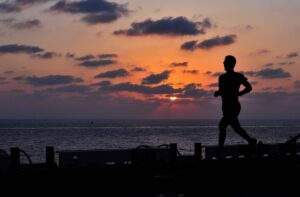 You’ve probably heard this advice about fitness: To get more exercise, get a dog. You’ll be forced to go on walks.

For cities, that adage might include get more dog parks.

The number of dog parks per capita is one of the indicators used in the American Fitness Index to determine fitness scores for the country’s 50 largest metro areas.

The annual index is from the American College of Sports Medicine and the Anthem Foundation. And for 2016, it names Washington, D.C., as the nation’s fittest city. It’s the third year in a row that Washington has earned No. 1 status. The assessment includes Washington’s vast suburbs in neighboring Virginia and Maryland.

Second fittest city, according to the index, is Minneapolis-St. Paul. Third is Denver. At the bottom is Indianapolis, Oklahoma City and Louisville.

Florida cities and their surrounding regions place in the middle and downward. Of the country’s largest metro areas, Tampa is No. 26. Jacksonville is 31; Miami follows at 32; and Orlando is 43.

First of all, the American Fitness Index isn’t looking for how many residents are marathoners or have athlete-level lung capacity. Health of residents is important, but so are their health behaviors, such as how many smoke.

Further, urban planning plays a role because the built environment can affect whether a community is fitness-friendly. For example, how easy is it to get around on foot?

The index also identifies target goals for each area and how they are being met.

Part of what puts Washington, D.C., on top are amenities that support active lives. In Washington, a higher percentage of people are cycling or walking to work, and more live within a 10-minute walk to a public park.

The nation’s capital and its suburbs also earned points because fewer people are dying of heart disease and diabetes, and there are fewer smokers.

In looking over scores for Florida cities, I can see that the index gives Tampa points for meeting or exceeding target goals for the number of ballparks, dog parks, playgrounds, golf courses, recreation centers and swimming pools.

However, maybe more people should be taking advantage of those recreational facilities. The index notes that Tampa residents could improve in how many get recommended amounts of exercise. They also aren’t meeting target goals for lowering rates of obesity or how many are dying from diabetes.

Miami earned points for lower rates of asthma and cardiovascular disease. It could improve through developing more parkland, ballparks and golf courses. It also could use more farmers markets.

Jacksonville is praised for its higher number of recreational facilities, like swimming pools, and for a higher level of physical education classes. Improvements are needed in the percentage of people using public transportation to get to their jobs and how much is spent on parks.

Orlando also won points for more phys-ed classes, along with more recreation centers. The index recommends nearly 20 areas to prioritize for improvement in the Orlando metro region, including how many people are obese or have asthma, heart disease or diabetes. Also, more dog parks, golf courses and ball diamonds would be a plus for this central Florida metropolis.

By the way, the index relies on the following guidelines from the Centers for Disease Control and Prevention to determine whether adults are getting enough exercise. How do you measure up?