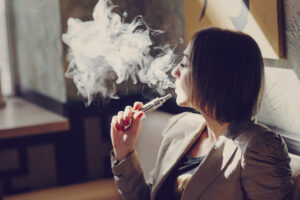 Good or bad? It depends on what side you’re on. This month, the Food and Drug Administration (FDA) announced that it’s taking regulatory control over e-cigarettes and hookahs. It established rules for the “vaping” business similar to the regulations imposed on tobacco-based cigarettes.

E-cigarettes have consistently grown in popularity over the years. Currently, there are an estimated nine million adult e-cigarette users in the United States. Their use has increased in teens as well, as noted in the National Youth Tobacco Survey. This survey collected data from about 20,000 middle and high school students across the country every year from 2011 to 2015.

Despite the FDA’s move, the public health community is still debating the issue of safety with e-cigarettes. Some say they can help people quit smoking, while others are certain they eventually lead people, especially young people, to move on to traditional cigarettes. And no one wants that. There are 480,000 tobacco-related deaths in the United States each year already.

So, what are the new rules that e-cigarette manufacturers and sellers have to follow. This article3 gives you a down-and-dirty summary of what’s involved and what isn’t, but I’ll address a few of the highlights here.

First of all, the new regulations ban the sale of e-cigarettes to anyone under the age of 18, and that might mean showing a photo ID to prove your age. This comes as some states, including California recently, are increasing the age to buy traditional cigarettes to 21. Vendors who are caught selling e-cigarettes to minors will be fined.

Also, part of the new rules is a requirement that makers and sellers of vaping products provide the FDA with a detailed description of the ingredients in their products, as well as their manufacturing process. They also must be able to prove any claims they make about their products, such as, “They are safer than traditional cigarettes.”

However, advocates for the regulations were disappointed to discover the new guidelines did not include a prohibition against flavored e-cigarettes and cigars. They argue that flavored products appeal to younger people and get them hooked on smoking. It’s possible the FDA will take up this fight at a later date.

You’ll still see ads for e-cigarettes, though. The regulations don’t ban advertising for these products. That seems odd to me. I get a few magazines at home, and there are full-page ads for e-cigarettes in all of them. It makes me wonder. What message are we really sending?