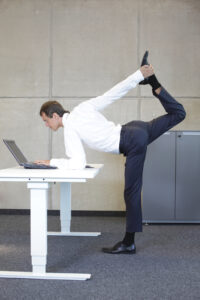 Excitement was building in our office as we talked about getting adjustable desks so we could get out of our chairs and spend some time standing at our keyboards instead of sitting. After all, sitting all day is not good for your health. As one article I read put it, people who sit too much are at an increased risk for diabetes, heart disease and early death.1 The article went on to discuss a number of benefits of spending part of your day on your feet.

First of all, if you’re on your butt, you’re not burning many calories. According to the article, you burn more than 170 more calories standing at your desk than sitting and, over time, that adds up. It’s a small, but positive step toward fighting weight gain and obesity.

In addition, studies have found that standing lowers blood sugar levels and prevents those after-lunch spikes. It also decreases the risk of heart disease and appears to reduce low back pain.

If that’s not enough, the article suggests, standing at your desk for part of the day can help improve mood and energy levels and may even boost productivity as a result. Bottom line, studies have found, according to the article, a strong link between increased sitting time and early death.

Standing at work is a no-brainer, right? Wrong.

An NPR article from March reported the results of an analysis of the best research done so far on the benefits of standing at work, and the analysts say, “Hold on!” According to them, there’s no real evidence of these health benefits. They claim the studies done so far were either too small to be significant or poorly designed, so their results are not scientifically meaningful. They even suggest that standing can be harmful by leading to enlarged, varicose veins.

That’s always possible, but the fact remains. Extended sitting is a killer.

I think a professor quoted in the NPR article summed up the situation perfectly. He suggested that as long as a person stands in moderation, he or she will reap some health benefits. I think that’s all we’re really looking for.