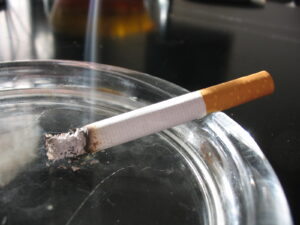 In 2008, I lost my father to lung cancer. The diagnosis came just three short months before his death at age 80. He was a lifetime smoker, having picked up the bad habit at the young age of 17. The dangers of cigarette smoking were years away from being unveiled and back in the 1940s, smoking was “socially acceptable.”

But in 2006, the world was shocked by the passing of Dana Reeve, widow of actor Christopher Reeve. Never having smoked a day in her life, Ms. Reeve died of lung cancer because of her exposure to second hand smoke while working for years as a singer in bars and restaurants filled with smoke.

Physicians and researchers believe that passive smoke — the smoke exhaled by others — is potentially even more dangerous than actively inhaled smoke.

Just last week, I was taken back by the sudden passing of a friend’s wife from lung cancer. She was 45 and leaves behind two young sons.

Another variable is genes. It is clear that some families have a higher occurrence of lung cancer than would be expected. While some of this might be due to shared smoking, some evidence suggests there are certain genes that predispose to lung cancer.

In approximately 40 percent of people diagnosed with lung cancer, the diagnosis is made after the disease has advanced. In one third of those diagnosed, the cancer has reached stage 3.

According to the Mayo Clinic, signs and symptoms of lung cancer may include:

So, as a smoker, be courteous and careful to those around you. And as a non-smoker, be aware of the risk of being around smoke, even if you don’t smoke yourself!