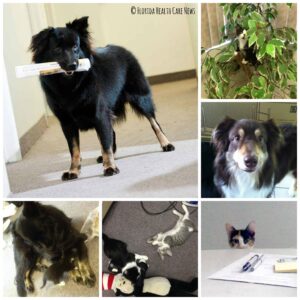 Ours is a pet-friendly workplace, as are about 20 percent of all companies in the United States, according to a survey by the American Pet Products Manufacturers Association (APPMA) — and that number is growing. It’s about time American companies realized the many benefits of having furry friends on the job. Stress reduction is the most obvious and most talked about benefit, but there are others.

In their survey, APPMA found that the majority of employees felt that having pets at work leads to a slew of advantages. For one, they felt that the freedom to have their best friends at work inspired a more creative environment. But, that’s not all. Other benefits they described included increased employee satisfaction, decreased absenteeism and improved relationships between managers and employees. Not bad.

Not only that, but there’s research to back it up. In a study conducted in 2010, researchers discovered that having a dog in the workplace increased collaboration among employees. In another study in 2012, investigators were able to demonstrate that dogs in the workplace reduced stress and increased employee satisfaction. Go, dogs, go!

Let’s face it. Pets at work are bound to make you smile. And that’s infectious, so everyone’s mood gets a boost. Just ask anyone in our office, and they’ll tell you that the presence of our “Morale Officer,” Luna – an amazing Malinois-Tervuren mix (a Belgian shepherd for us laypeople) – is a daily pick-me-up.

Dogs are great to have around the office, but don’t discount the value of having cats on board, too. They might be more aloof than dogs in general, but nothing beats the calming effect of petting a purring feline — and watching them dart through the halls can be a very entertaining break in the day.

You don’t have to tell the government employees of Doña Ana County in Las Cruces, New Mexico, about the benefits of having cats at work. They’ve got a unique set-up in their office where they’ve got cats from a local shelter “on loan” that they can spend time with at their desks. If they prefer, they can spend time with the cats in a special space set aside in their office that they call “the library.”

As an aside, a secondary benefit of having the cats on site is that many of them are being adopted. There is a lot of public traffic through the government office, and when people see the cats in the library, many choose to give them forever homes. Great story. It’s got benefits for everyone.

Sure, there’s some work involved in having pets in the workplace. They have to be fed and watered, and dogs have to be regularly walked outside. But these are small inconveniences considering the many benefits associated with their presence. Higher morale, better relationships, and increased team cooperation, commitment, focus and satisfaction, along with decreased stress and absenteeism more than make up for those inconveniences.

Good planning and a few guidelines can easily deal with the little complications that some places use as excuses, such as allergic employees, so few barriers remain in the way for more companies to employ pet-friendly policies. Let’s hope they do!