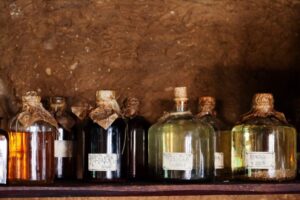 Remember the 1992 movie Medicine Man with Sean Connery and Lorraine Bracco? He plays an eccentric scientist working on a cure for cancer in the Amazon jungle, on the cusp of a major discovery thanks to help from an indigenous medicine man. Naturally, a logging company is bulldozing the very jungle where he is conducting his research, so time is of the essence.

In the end – spoiler alert! – Connery’s character accidently discovers that it’s a rare species of ant that holds the key to curing cancer. It was the ants all the time! The ants!

The Telegraph article points to a study conducted at the School of English at Nottingham University in England in, where researchers may have found a remedy for Methicillin-resistant Staphylococcus aureus, better known as the superbug MRSA.

Using – get ready for it – a thousand-year-old treatment for eye infections made up of cow bile, garlic and wine, Nottingham’s Dr. Christina Lee and microbiologist Freya Harrison came up with an ointment hat not only killed, but obliterated MRSA in tests.

The recipe, which was very detailed and required a brass pot, straining, and letting the concoction sit for nine days, came from Bald’s Leechbook, an Old English manuscript in the British Library that Dr. Lee, a Viking studies professor, translated.

“We were genuinely astonished at the results of our experiments in the lab,” she said.

To ensure the salve’s success wasn’t a fluke, a team of scientists at Texas Tech University repeated the experiment with the same results. “The salve performed as ‘good, if not better’ than traditional antibiotics at tackling the superbug,” according to scientists there.

So what does this tell us? It tells us that the answers we need are already there. As Mother Nature provides the problem, so does she provide the cure – we just need to find it.

Maybe our scientists don’t need to spend billions of dollars in labs creating synthetic serums. Maybe we need to spend more time scouring the depths of the oceans, peaks of mountains and yes, fauna and flora of the jungles, to find the answers to how to cure our diseases.

Also, perhaps, we need to take another look at some old wives’ tales. Like a thousand-year-old recipe that is doing what modern medicine can’t, I think medical lore may have some merit. Do you know of any old-fashioned “cures” that should get a second look by modern medicine?